There have been so many versions of and variations on the story of Cinderella, that it’s hard to get terribly excited about another one. However, Disney’s latest live action incarnation of the fairy tale is surprisingly delightful. Based heavily upon their 1950 animated film and directed by the always classy Kenneth Branagh, the Cinderella of 2015 offers something for everyone.
By Jenniferon July 12, 2016
0 Comments
Our Rating 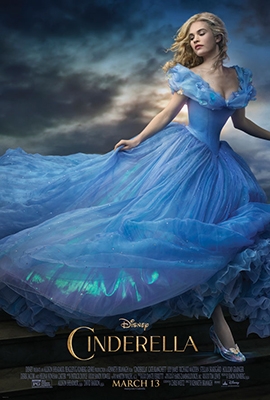 One of the nicest things about the Cinderella reboot is that it offers more back-story around every aspect of the plot. We meet Cinderella (actually named Ella, and played by Downton Abbey‘s Lily James) as the cherished only child of two loving parents. Her early life is gentle and idyllic, with the greatest hardship being her father’s frequent absences for work. It’s not until Ella’s mother falls suddenly ill and passes away that Ella faces real heartache, but it’s a heartache that will evolve and grow with each coming day.

Eventually Ella’s father (Ben Chaplin) decides it’s time to remarry, but, like all men in fairy tales, is a terrible judge of character when it comes to choosing a second wife. He marries the icy Lady Tremaine (Cate Blanchett) a widow with two stupid, snotty daughters, Anastasia (Holliday Grainger) and Drizella (Sophie McShera), and a nasty cat named Lucifer. Then, further lacking foresight, Ella’s father promptly leaves on one of his prolonged business trips, during which Lady Tremaine sneakily ousts Ella from her bedroom and banishes her to the attic. One would hope that Ella’s father would remedy this situation upon his return, but instead he drops dead, leaving Ella to fend for herself.

Bitter over the loss over a second husband (and income), Lady Tremaine subtly escalates her cruelty toward Ella until she is little more than a household servant, waiting on her step-family hand and foot. Relying on her mother’s dying words,”be kind and have courage”, Ella manages to endure their terrible treatment, even letting them nickname her Cinderella after she takes to sleeping on the hearth to avoid the long climb to the attic at night. She finds companionship in the animals on their small farm, and it’s while out riding her horse that she happens to run into Prince Charming (Richard Madden). Not realizing who he is, she chastises him for partaking in a stag hunt and basically wins his heart.

From this point forward, the familiar story of Cinderella begins to unfold with the palace hosting a ball for the people so that the Prince might find his princess and wed before his father’s imminent death. Naturally Lady Tremaine and the stepsisters are chomping at the bit, but Cinderella assumes she’ll be attending too. Lady Tremaine quickly squelches that notion, leaving Cinderella in tears. Clearly the assistance of one’s Fairy Godmother (Helena Bonham Carter) is required. The classic encounter at the ball ensues, followed by the lost glass slipper and the search for its owner, culminating in a satisfying happily ever after.

This retelling is faithful enough to the original that there really are no unexpected turns, but there are endless pleasant surprises in the details. We get an actual sense of the complicated but sweet relationship between the Prince and his father, and there’s more interaction between the Prince and Cinderella, making their attraction seem less like a flimsy case of love at first sight. Visually the movie is stunning, whether you’re looking at a sun dappled meadow, Cinderella’s golden pumpkin carriage, or Lady Tremaine’s Art Deco inspired costumes. These little additions elevate an already familiar story and help to create a film that is enjoyable for the entire family.