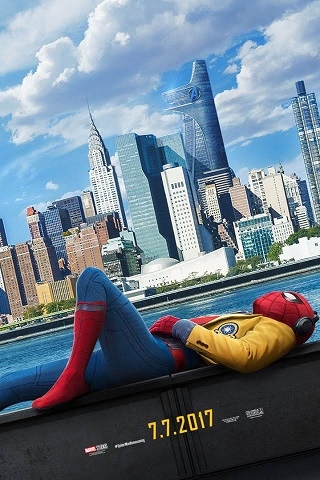 Honestly, I was grinning from start to finish. It’s light-hearted, action-packed, funny, smart and – unlike so many recent films of its ilk – wonderfully human. The characters’ problems are comparatively small scale, and its Big Bad isn’t a god or an alien or some kind of mutant creature: he’s just a blue-collar guy who feels like he’s been stiffed by the system.

Picking up after the events of Captain America: Civil War, and thankfully skipping over Spider-Man’s bitten-by-a-radioactive-spider back story, the film features spindly Tom Holland once again slipping into Spidey’s suit and proving to be the most relatable, charming incarnation yet of the beloved web-slinger. His Peter Parker is an awkward 15-year-old high-school nerd, with an equally geeky best friend named Ned (scene-stealer Jacob Batalon) and a massive crush on a pretty senior (Laura Harrier). Peter’s still riding the high of helping out the Avengers, and eager for Tony Stark (Robert Downey Jr.) to give him another assignment… but days turn into weeks and those assignments never come, so he resigns himself to being a self-appointed “friendly, neighborhood Spider-Man,” thwarting petty criminals in his spare time.

But it’s on one of his routine patrols that Spider-Man stumbles upon some seriously nefarious activity on the part of engineer-and-scrap-metal-retrieval-foreman Adrian Toomes (Michael Keaton) and decides to take crime-fighting matters into his own hands. Seems Toomes has been using debris from the wreckage of Stark Enterprises to craft an array of hardcore weapons, not the least of which is his own elaborate, tech-heavy winged suit (turning him into iconic comic-book villain Vulture). Ignored by both Tony and his unofficially babysitter, Happy (Jon Favreau), Peter is left to his own devices, embarking on a young dude vs. older dude battle… all the while coping with the day-to-day stresses of being a teenager.

What follows is an energetic, engaging and thoroughly entertaining story, packed with nifty nods to the Marvel Comic Universe, well-played plot twists and more than enough high-flying, high-stakes misadventures for our young hero. The casting is spot-on, with baby-faced Holland injecting a grounded, relatable, believable tone to his portrayal. His supporting cast are all terrific, from Keaton’s nicely understated nemesis (who’s likewise understandable rather than over the top) and Tomei’s perpetually worried Mae, to Peter’s fellow high schoolers – most notably Batalon, who will hopefully be back for the inevitable sequel. And the filmmakers wisely opt to fill out the supporting roles, no matter how inconsequential, with recognizable talent, including: Logan Marshall-Green as Shocker; Silicon Valley’s Martin Starr, comedian Hannibal Buress and Orange is the New Black’s Selenis Leyva as teachers;  Garcelle Beauvais as Liz’s mother; and Donald Glover (!) as a semi-smooth criminal. There’s also Jennifer Connelly voicing Karen (aka: “Suit Lady”), and Chris Evans and Gwyneth Paltrow popping up as, respectively, Captain America and Pepper Potts.

Super-high marks go to relative-newbie director Jon Watts – whose only feature credit before this one is the 2015 thriller Cop Car – who proves he knows exactly what to do with the myriad moving parts in a film like this. Watts deftly balances humor with heart and superhero spectacle with solid storytelling to create the kind of big-screen experience audiences love. And one that, more importantly, leaves them wanting more.