We are all going to hell in a handbasket because of technology, but how does one stop the disconnect?
By Lindaon April 27, 2013
0 Comments
Our Rating 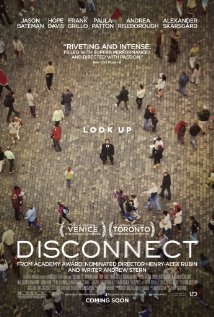 I have to admit, my friend and I were not in the right place to see such a multi-plot movie about miserable people being miserable to each other, as it was the same week of the “Oh! The humanity!” news of the Boston Marathon bombings. From the vague poster for this film, with a bunch of people on a city street, and the tag line “Look up”, I went in to it thinking that maybe this was a sci-fi movie about people getting zapped into space by visiting aliens or something. But no, the menace in Disconnect is our own self-made menace: that of modern technology sucking the souls out of humanity.

I’m not one to argue against the idea that technology, while bringing us together via social media, email, and the internets in general, has made us more disconnected on a personal, human level. The multiple storylines in this film reflect the repercussions (most of them tragic) of constantly being wired.

The parents (Jason Bateman and Hope Davis) of a high school boy (Jonah Bobo) are forced to deal with the horrifying and heartbreaking consequences of their son being bullied by classmates online. Another couple (Alexander Skarsgård and Paula Patton), while dealing with their own personal grief over losing their child, suddenly have a new problem on their hands when their identities (and cash) are stolen online, forcing them to hire an investigator (Frank Grillo) to track down the perpetrator. Finally, an ambitious reporter (Andrea Riseborough) investigates online teen porn sites, and gets in a little over her head when she becomes emotionally attached to one of the young stars (Max Thieriot).

The thing is, all of the cast is uniformly fine, with Jason Bateman being a notable standout as we get to see him flexing his dramatic chops for a change. The stories are for the most part interesting, if not a bit predictable. But like the equally-miserable Crash, it just shows us what sucks about humanity, and doesn’t really offers us anything in return. I guess holding a hand out to lift someone off the ground after you’ve punched them in the snout is something, but you basically end up with a film that is just as depressing as watching real life tragedy unfold on the news. 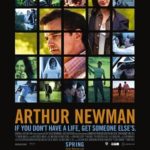 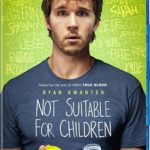