Not Suitable For Children

Though it takes the shape of a sex comedy with all the usual trappings, Not Suitable For Children has enough sweetness and substance to raise it above the genre. 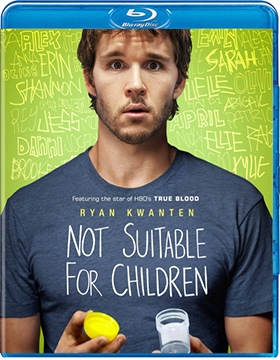 Ever since we listened to Marisa Tomei’s biological clock ticking like this: STAMP! STAMP! STAMP!, I’ve kind of been over the whole fertility crisis comedy genre. There’s something about it that reduces otherwise intelligent, dignified characters into hysterical half-wits, but maybe that’s because it’s difficult creating comedy out of something that’s not funny at all in real life. It’s a dark day when you realize you’re running out of time to have a kid of your own, and suddenly you’re faced with related realizations about how maybe you don’t have the right partner, or the right job, or the right housing situation, or even the right car for bringing a child into the world. Though Not Suitable For Children is a retread of familiar territory in many ways, it gets points for telling the story from a male perspective and for showing that sometimes not getting what you want is perfectly okay.

When Jonah (Ryan Kwanten) is diagnosed with testicular cancer, his carefree days of running a party house come to a grinding halt. He’s confronted rather aggressively with the reality that he’s going to lose the ability to father a child naturally within just a few weeks. Attempts at freezing his sperm and facing the whole fatherhood question later fail miserably, leaving him with one option – get someone pregnant asap!

Having led the wanton life of a twenty-something with no commitments, Jonah doesn’t exactly have an appropriate candidate to serve as the mother of his child, so he sets about asking all the women he knows (and a few he doesn’t) if they would like to bear his child and then, you know, share it with him for the next eighteen years. There’s no actual relationship required and he’d be a fulltime dad, but certainly you’d be an involved co-parent as well. Strangely, dear Jonah has no takers, though his dopey earnestness does win him a fair amount of sympathy. Even his cynical best friend/housemate Stevie (Sarah Snook) can’t resist helping to the best of her abilities, even setting up awkward meetings between Jonah and women she knows. Having exhausted all possibilities with no luck, they are left with the bleak reality that Jonah is not going to have a biological child. Unless…

Suddenly having a child with Jonah seems like the perfect arrangement – Stevie can maintain her freedom, she and Jonah can continue living in the same house, and she can have a child. Who wants to bother with traditional marriage and commitment and all that rubbish? It’s just going to go down the toilet in a few years anyway. And so, Jonah and Stevie embark upon a noble, initially awkward mission to conceive a child. The results are not what they expect, but the movie isn’t so much about tidy endings as it is about maturing. Though it takes the shape of a sex comedy with all the usual trappings, Not Suitable For Children has enough sweetness and substance to raise it above the genre. Real life happens even to those who are least prepared for it, and in response there’s really nothing to do but grow up.