Oh, and there are no horses in Fresh Horses.
By Jenniferon December 27, 2014
0 Comments
Our Rating 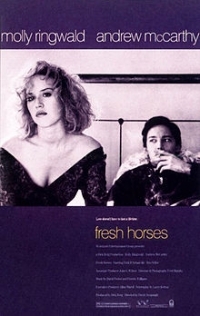 The movie begins with best friends Andrew McCarthy and Ben Stiller searching for a few last hurrahs during their senior year of college. Both are engaged and find themselves poised uncertainly on the verge of adulthood. A future full of good jobs, happy families, and picket fences feels slightly false, so they do what anyone would do—they head up to this weird party house in the boonies. It’s owned by Patty D’Arbanville, who lets the kids drink and shoot pool all day. It’s there that Andrew meets a tarty-looking Molly Ringwald. He is instantly smitten, but don’t expect Pretty In Pink 2 to unfold. Fresh Horses is a Drama. You can tell it’s deep because the sun never shines, and every scene is flanked by fog, drizzle, snow, sludge, sleet, mud or puddles.

The Drama continues as Andrew begins meeting Molly illicitly, jeopardizing his whole future for a mysteriously intriguing girl from the wrong side of the tracks. Soon worlds collide, and Andrew must ask himself the hard questions: does he love Molly or does he think she’s an ignorant Jezebel? Does he care what his parents think? Does he love his fiance or is he just trying to marry well? Does he like Ben Stiller or does he really want to tape his mouth shut? Such burning questions! How will it all work out?!

Somehow it’s really hard to care as this seemingly interminable movie drags on and on. You begin to notice other things, like the fact that watching Molly try to be edgy is really kind of embarrassing. Now that Andrew McCarthy has admitted to being hungover during the peak of his career, you can kind of see that the spacey-sensitive thing he had going was actually the result of heavy drinking. And Ben Stiller really is an annoying little man. After I became bored with these reflections, I made myself some soup and ate it while Ben, Andrew, and some girls philosophized, drank, and frolicked in somebody’s pool, because apparently part of the movie takes place IN REAL TIME. Once the soup was gone I started getting annoyed. Where the hell was Viggo?

I figured out early on who Viggo was going to be, and was sorely disappointed that he was mentioned far more than he actually appeared in the movie. You see, the twist in Fresh Horses is that Molly has an abusive stepfather and married to the baddest guy in town to get away from him. But she’s only fifteen! That’s why she seems so dumb! She’s not even in the ninth grade!

“Whah don’tchu wash yer mouth out with it?” Viggo drawls, propping his leg on a drawer or a garbage can or something, and blocking Andrew’s way. Andrew does his patent shifty-eyed look of terror, and Molly rushes in to break it all up. “Stop it! Just stop it, both of you!” Yeah, because one of them could have gotten killed the way they were carrying on! Nevermind that a little girl could have knocked Viggo on his ass the way he was sitting. And this truly is the best part of the movie.

I might as well tell you the ending and save you from the agony of watching it yourself. Molly divorces Viggo, and Andrew learns not to be such a big phony. They don’t get together in the end. It’s supposed to be one of those thought-provoking films that change the way young people look at the world, but really, that’s two hours of my life I’ll never get back.

Oh, and there are no horses in Fresh Horses.