The movie is at once funny, suspenseful, and strangely endearing…
By Jenniferon September 24, 2013
0 Comments
Our Rating 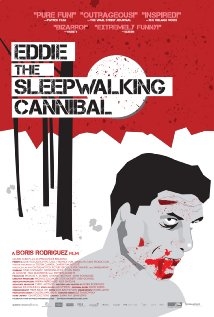 Eddie The Sleepwalking Cannibal is a lesson in not judging a DVD by its cover. I really hate that cover. I hated it so much that I was afraid the movie would somehow have cartoons in it, like, graphic, cannibalistic cartoons. I hated it so much that I immediately blocked out the movie’s arrival after adding it to a stack of games and DVDs next to the TV. I discovered it again a month or two later with total surprise, and then instant guilt. Luckily the guilt was so overpowering that I stuck the movie right in the player and started watching. And here’s the thing – the movie is good! Screw you, awful cover, screw you.

When Lars Olafssen (Thure Lindhardt) moves to a tiny Canadian town to teach art, he expects to lead a quiet, retiring life. Unfortunately, his reputation precedes him, and the townspeople have their own expectations for the famous young painter. First of all, they expect him to paint, something Lars has found painfully impossible in recent months. They expect that his name will attract students and supporters to their art school, and they expect his presence to draw attention to their no-name town. And, strangely, they expect Lars to take in Eddie (a “special” student he barely knows) when Eddie’s mother dies. This is a lot to ask of a newcomer, but Lars plays along quite agreeably. He got off on the wrong foot with the local sheriff and certainly doesn’t want to upset anyone else.

Though Eddie (Dylan Smith) is generally easy enough to live with, he does have a bit of a problem with sleepwalking, a problem exacerbated by the fact that he also tends to kill small animals and, you know, some people, while doing it. He just staggers around the snow in his underpants, mindlessly biting the heads off bunnies or chomping into the necks of offending neighbors. Dutifully concerned, Lars reports Eddie’s strange habit to the school…who knows perfectly well that Eddie’s got a history. However, Eddie’s mother’s will stipulated that if the school cared for Eddie, her entire estate would go to them. It’s in their interest for Lars to keep Eddie, in more ways than one.

As Eddie’s behavior continues to escalate and Lars trundles along behind him, cleaning up the carnage, Lars finds himself completely inspired. Each cannibalistic episode is followed by a creative frenzy, and everyone is delighted to find Lars painting again. Lars and Eddie, Eddie and Lars, it’s a match made in heaven…until it’s not.

The movie is at once funny, suspenseful, and strangely endearing, though it should be noted that it’s probably not for everyone. It’s definitely an offbeat horror comedy, but the quirky, likable characters make it reminiscent of Fargo or Northern Exposure. As long as you factor in a bit of random cannibalism and some spurting blood, Eddie The Sleepwalking Cannibal is a refreshing treat.

Extra features include a behind the scenes featurette, and interview with director Boris Rodriguez, and the theatrical trailer. 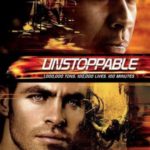 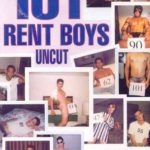