It never occurred to me that the slumber-party classic Ice Castles would be ripe for a remake, but just think how much professional ice skating has changed since the late 70s.
By Lindaon September 29, 2013
0 Comments
Our Rating 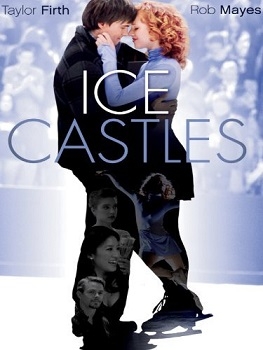 I can just about guarantee that any girl born in the early 70s has gone through the slumber-party right of passage called Ice Castles. The original 1978 movie starred Lynn-Holly Johnson as a young ice skater who (gasp!) goes blind in an accident, but decides to compete anyways, and ubiquitous dreamboat Robby Benson as the boy who loves her. Picture a pajama-clad room full of 3rd grade girls weeping as the girl exposes her handicap by tripping over a rose in competition, and the boy walks out onto the ice to comfort her as the crowd cheers. Sob!

It never occurred to me that Ice Castles would be ripe for a remake, but just think how much professional ice skating has changed. The sport is much more athletic and technically difficult, and skaters are bigger celebrities than ever (with such off-the-ice drama as the Harding/Kerrigan knee-clubbing, for instance). Ice Castles (the remake) better acknowledges the bigger picture of the world of competitive skating, but skimps on the character development in the process.

This time around, Lexi (Taylor Firth) is a corn-fed Iowa girl who grew up skating on ponds, and apparently is so good that when she enters her first competition at 16 (really late in real-life skating, if you think about it), she impresses silver-medalist-turned coach Aiden (Morgan Kelly). Aiden invites her to train for nationals in Boston, and she reluctantly agrees to leave behind her single dad (Henry Czerny) and her hunky college hockey-player boyfriend Nick (Rob Mayes) to follow her dream.

This is actually the most interesting part of the new Ice Castles. Lexi is put up in a wing of a hotel that houses only skaters. They have the facilities to practice as well as rooms for weight training rooms, massage, and therapy. Lexi is warned that she will only practice practice practice. Luckily, there is not a Showgirls-vibe to the whole thing, with skaters throwing teddy bears into the paths of their opponents on the ice, but there is a little bit of jealousy as everyone wonders who Aiden’s hot newcomer is.

Lexi, of course, does very well in her first regional competition, but it wouldn’t be Ice Castles without a tragic accident that causes Lexi to lose her sight. She slinks home to recuperate (or rather dig herself into a hole of depression), but her family and boyfriend rally around her and remind her that she still has a reserved slot at nationals, so heck, why not try?

The characters in Ice Castles, namely the triangle of Lexi, Nick, and Aiden, are a bit dull. But I think where the remake improves over the original is by highlighting the skating rather than the romance. Taylor Firth does her own skating in the film, and since she is a professional, the skating is at least not embarrassingly pedestrian. Fans will of course enjoy spotting some cameos, like by Michelle Kwan who appears as herself as a commentator. And still romantics may gasp over Lexi’s famous stumble at the end. It may be cheesy, but there is still that little spark in the story that makes you want to believe that it could really happen, even if you have to listen to a horrible remake of the hit song “Through the Eyes of Love” (sob!).