Surely you can’t stumble through life as an essentially horrible person and come out unscathed, can you? 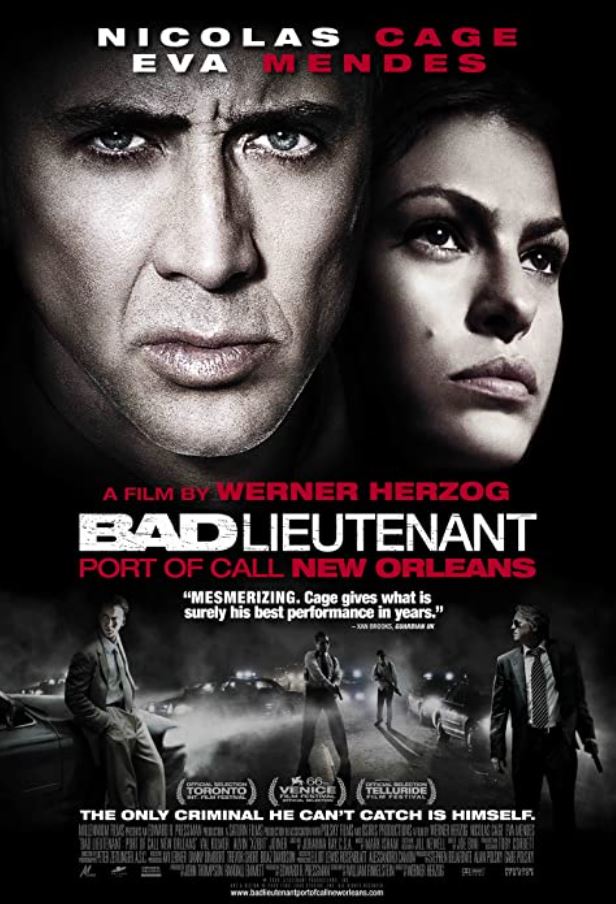 Bad Lieutenant: Port of Call New Orleans is a hard nut to crack.  From the outset, it’s difficult to tell if what you’re watching is meant to be dead serious or very subtly funny.  In the end, the movie is actually both.  It serves as a dark comedy as well as a serious commentary on corruption in the field of law enforcement.

In one of the most bipolar roles of his career, Nicholas Cage stars as Terence McDonagh, an unorthodox detective working in New Orleans in the days just following Hurricane Katrina.  After begrudgingly rescuing a man trapped by the flood water, McDonagh is awarded a medal of commendation.  We know he doesn’t quite deserve all the hoopla, but we can’t deny that he did his job.  The trouble is the way he does his job on a day to day basis.

Though McDonagh has a legitimate back injury which must be managed with pain medication, most would agree that wielding one’s badge and one’s gun is not the best way to encourage fast service at the pharmacy.  One would probably also agree that an officer shouldn’t try to score drugs for himself in the middle of a bust, and that sexual encounters with hot lady perps are a bit on the inappropriate side, especially when they take place in the middle of an arrest.  All of this is everyday stuff to McDonagh, who routinely reports to work under the influence.

Fittingly, McDonagh’s personal life is just as complicated as his professional life.  He’s in love with a prostitute (Eva Mendes), and his family situation is something of a train wreck to say the least.  Somehow you keep thinking that all of this is going to blow up in his face, that at least one of his gross misjudgments is going to come back to bite him, or that someone is going to call him on his chronic bad behavior.  Surely you can’t stumble through life as an essentially horrible person and come out unscathed, can you?

What makes Bad Lieutenant: Port of Call New Orleans brilliant is that the answer to this question is a resounding yes.  You can’t help thinking that one day the other shoe is going to drop on McDonagh, but for all intents and purposes his shady, skanky, generally unethical methods are rewarded.  The bad lieutenant gets his happy ending and we’re left to wonder how often this happens in real life, not just in law enforcement, but in all fields.  There are certainly plenty of cases of evil rising to the top, and this is but one comically sobering example.