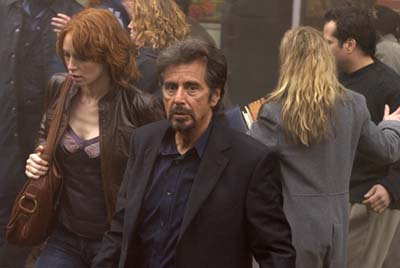 1. 88 Minutes. I’ve seen a lot of bad thrillers, and I’ve loved a lot of bad thrillers… but I have never loved a bad thriller as much as I love 88 Minutes. It’s hilarious from start to finish, from the moment Al Pacino’s raggedy wig is introduced, to the moment Leelee Sobieski tries acting like a “bad girl.” From Al Pacino’s reanimated corpse going clubbing with college girls, to Amy Brenneman screaming, “MILKMAID!” I could go on for 88 minutes about how much I love this movie, but you should really rent it for yourself. 88 times.

2. Jumper. Hayden Christensen plays a complete asshole with the ability to teleport anywhere in the world… but he’s still an asshole. Consider an early scene in the film, where Christensen’s character watches news coverage of a disaster where tons of people are trapped and only someone who could teleport could help them. He doesn’t help them, he never learns to help people, and I spent the whole movie waiting for someone to help those trapped people. Instead, Christensen prances around going clubbing around the world and choking out his lines from that wooden, wooden face.

3. Star Wars: The Clone Wars. This one made history as the first movie in my ENTIRE LIFE that I have walked out on.

4. In the Name of the King: A Dungeon Siege Tale. Can anyone believe Uwe Boll is still allowed to make movies anymore? AND that he gets semi-famous performers like Ray Liotta, Jason Statham, Ron Perlman, Matthew Lillard, Burt Reynolds, Claire Forlani, John Rhys-Davies, and LEELEE SOBIESKI to be in them? With such a bizarre cast, In the Name of the King plays like an embarrassing dress-up edition of The Surreal Life. But Matthew Lillard is the best of all, overacting with such zeal that Burt Reynolds looks visibly weirded out. And you know they only got one take, so they had to use it.

7. Bangkok Dangerous. If you thought Nicolas Cage’s wigs couldn’t get any worse after Ghost Rider and Next, think again. And if you had any hope that 2008 would be the year that Nicolas Cage became a legitimate movie star again, think again. Instead, Cage continues living his midlife crisis on the big screen in the form of hysterically cheesy action movies and taking off his shirt to show off that toned exoskeleton. Viva La Cage! Keep ’em coming, Nic.

8. Untraceable. About six years too late to scare anyone, the latest movie about a killer website stars Diane Lane as an FBI agent investigating a site where people log on to watch someone die, and the more people log on, the faster they die. So, you know, this is totally a statement about the dangers of voyeurism in the Internet Age. Or it would be, if this wasn’t the stupidest idea for a movie since 88 Minutes.

9. Never Back Down. This teen Fight Club made me want to back down out of the theater. Poor Djimon Hounsou, man.

10. Speed Racer. Here’s what someone should have told the Wachowskis during every day of production on this visually vile dud: “NO. NO. NOOOOOO.”