Eternal Sunshine of the Spotless Mind

Eternal Sunshine of the Spotless Mind is simultaneously exactly what I expected, yet completely different than I imagined.
By Vickieon September 29, 2013
0 Comments
Our Rating 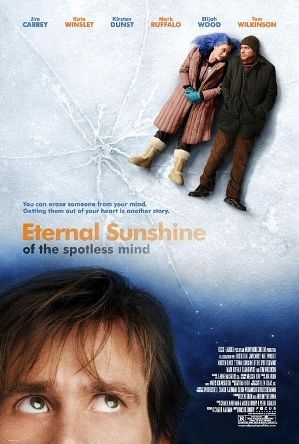 Charlie Kaufman has earned the somewhat unique honor of being a screenwriter who is a household name, with the creation of such cinematic head trips as Being John Malkovich and Adaptation. He specializes in literalizing the psychological, and with Eternal Sunshine of the Spotless Mind, this tendency shifts into overdrive, with surprisingly emotional results.

Lacuna, Inc. is a company specializing in the erasure of troubling memories. Clients come in with a bag full of objects proving that they ever knew a person, and leave with no clue that they ever met them. Near the beginning of the film, Joel Barish (Jim Carrey) is upset because his recent ex-girlfriend, Clementine (Kate Winslet), pretended not to know him when he tried to talk to her. As it turns out, Joel learns, Clementine wasn’t pretending—she has turned to Lacuna, Inc. and had him erased from her memory. Angrily, he resolves to do the same to her.

Nearly the entire movie takes place in Joel’s mind as, after being drugged into unconsciousness for the procedure, he becomes aware of the erasure of Clementine from his memories, realizes that he doesn’t truly want to erase her, and begins to “hide” her in his other memories. Meanwhile, in the real world, some alarmingly unprofessional Lacuna representatives (Mark Ruffalo, Elijah Wood, and Kirsten Dunst) are responsible for making sure nothing goes haywire in Joel’s erasure process. If you guessed that they don’t do a very competent job of it, you would be right.

There are logical quibbles to be had here, but they’re not important, because this isn’t a science fiction film. It’s the story of a relationship, unfolding in reverse before our eyes. Director Michel Gondry, famous for his visual innovation, takes us on a surreal and mesmerizing trip through Joel’s mind using brilliant editing and special effects. This movie is really something to see, people. But, unlike the issues some people had with the out-of-order storytelling in 21 Grams (which I haven’t seen, so I can’t say for myself), the style here is not self-conscious, it’s not a gimmick, it doesn’t exist for its own sake. What it does is capture perfectly the way it feels to remember a past relationship. There was so much pain towards the end, but there was so much love for a long time, too. Where does that love go?

In Eternal Sunshine of the Spotless Mind, Carrey proves once again that he is an actor of underestimated versatility; say what you will about his straight-up comedies, but there’s something to be said for a man who can play Andy Kaufman, Truman Burbank, and the Grinch. I mean, I still have nightmares about the cinematic atrocity that was The Grinch, but he pulled it off as well as anybody could have. Here, Joel is the kind of guy you would write off as a loser if you saw him on the street.

But Carrey’s performance is deeper than that. Like Bob and Charlotte in Lost in Translation, he and Clementine are people who feel alone in a crowd, who don’t really feel part of everyone else. Their connection is so touching because it is so rare, and their breakup is so tragic because it shouldn’t have to happen.

As for Winslet, her role in most of the film is not actually as Clementine herself, but the version of Clementine that exists in Joel’s mind, and she is always believable, if that is the right word.

I loved this movie. You literally never know what you’re going to see next, or where Gondry is going to take you, both visually and narratively. I must confess to crying once or twice during the film, particularly during a sequence that takes place in a crumbling beach house that is equally bizarre and heartbreaking. It’s the emotional punch of this film that completely elevates it from gimmickry.

Director Michel Gondry is an unintelligible little Frenchman (much fun is had at the expense of his accent), with a weird, warped sense of what is a good idea in a film. To find out some ideas he had that DIDN’T make it into the film is fascinating, and more than a little bit baffling (the bafflement was often shared by the crew, who recount these tales with laughter).

One scene that is highlighted involves Clementine stomping off down the street, with Joel in pursuit. He dumps his car, chases her down the street, only to find himself face to face with the car he just abandoned. He turns around, runs down the street, and there is his car again. The wizardry is revealed, as is the fact that the special effects guys erased one of Kate Winslet’s legs in a certain shot, and no one in the test audiences noticed (I sure hadn’t)! So they end up dropping a CGI car out of the sky behind her, to give the audience the needed jolt to show that things were unraveling.

I particularly enjoyed the explanations of the low-tech methods that Gondry brought to the special effects. Why use CGI when you can force your actor to run from one side of the scene to another, behind the camera, in a single shot, to make it seem like he is two places at once? It’s like Guerilla Filmmaking 101. It doesn’t always work… but when it does? A triumph in creative filmmaking!

Eternal Sunshine sounds like it would have been a creative blast to work on. And even more so, since it came out to be such a brilliant movie! It is too bad that more filmmakers and writers aren’t like Michel Gondry and Charlie Kauffman… willing to think outside of the box, and bend the rules, without bending the budget.