Could this movie possibly be more overwrought? 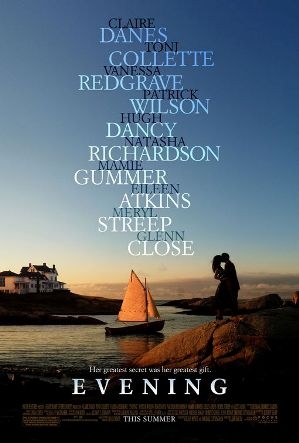 For all the hype it got, I expected Evening to be an emotional tour de force, an Oscar shoo-in, a powerhouse of talent. I expected something to substantiate the wild claims of fabulosity that filled media outlets all summer long. Instead I was simply disappointed. Some words that spring to this reviewer’s mind are trite, sappy, and contrived.

As Ann Grant Lord (Vanessa Redgrave) lies dying in her bedroom, her two daughters Constance (Natasha Richardson) and Nina (Toni Colette) keep vigil. Connie flaunts her blond-haired-blue-eyed domesticity, and Nina attempts to be the rebellious nonconformist with her heavy eyeliner and dyed hair. The two frequently butt heads as Ann languishes upstairs, generically dying and remembering one life-altering weekend in her past. As she mumbles about someone named Harris and how they killed a man together, Nina’s curiosity is piqued. Are these ramblings the delusions of a dying woman, or did her mother have a whole life they knew nothing about?

Through flashbacks we relive the weekend where young Ann (Claire Danes) served as the maid of honor at her best friend Lila’s wedding. Other characters inform us that Ann has unique taste in fashion, is worldlier than her friends, and aspires to be a singer. We are told to like her, but there’s little in Danes’ performance to compel us. She comes across as absolutely ordinary, but try telling that to Lila’s younger brother.

Buddy (Hugh Dancy) befriended Ann in college, and began romanticizing her from the start. Four years later, he still carries a note she passed to him in class one day, and from the outside they look like a perfect match. Buddy is lively and funny, and he’s easily the most interesting character in the movie. Unfortunately, he seems to be a little bit gay and a total alcoholic, plus there’s really no room for him to shine with the amazing Harris (Patrick Wilson) in the picture.

Again we are told that Harris is the greatest thing since sliced bread, but he’s actually kind of waxy-looking and wooden. Lila (Mamie Gummer) is getting cold feet about her wedding because she’s loved Harris since she was fifteen, but he blows her off, and she’s reduced to a Jello-y puddle of tears and indecision. If she can’t have Harris and doesn’t love her fiance, what else can she do? At twenty-four, she’s clearly too old to dream a new dream, and anyway, she has to save face for her perfect high-society parents (Glenn Close and Barry Bostwick).

Ann tries to be supportive, but she too is a bit distracted by Harris. After a ghastly performance of “Time After Time” at the reception, she heads outside with him, but they’re soon interrupted by Buddy, who plants a drunken kiss on Harris’s lips. Perhaps this is why Ann balks when Buddy proposes to her—maybe she knows Buddy better than we do – but soon he’s jealous, pouting, and acting out. Ann worries that he’ll hurt himself, but she gives up her intervention plan in favor of a make-out session with Harris. When they emerge from the shed the next morning, the worst has happened, and Buddy is dead. They walk into a scene of chaos and hysteria when they go up to the main house, a scene that finds Glenn Close making a noise similar to the one made by the ghost in The Grudge—not screaming, not keening, but sort of a dry ahh-ahh-ahh sound you might make at the doctor’s office. Could this movie possibly be more overwrought?

Appallingly, the answer is yes. After years of estrangement, Lila (now Meryl Streep) makes an appearance at Ann’s deathbed. She lies down so that they’re face to face (I’m sorry, but I can only think Ann would smell of sickness and dirty hair by this point), and they reminisce about The Time Ann Sang At The Wedding. This seems to have been the crowning moment in both of their lives, and Ann laments that one of them really should have married Harris, as though he’s a Ken doll you could just marry off to whichever Barbie you wanted.

So many of these moments ring false, as though you’re watching someone’s idea of how women interact with one another, as opposed to how women really are. In the end everyone realizes that there are no mistakes in life, which is a fine sentiment if you have no standards and no expectations. As someone who has both, I’d file Evening in the department of movie mistakes.