No one expected her to meet her end while riding her horse at a leisurely pace and doing a friendly parade wave to the townsfolk…
By Jenniferon December 27, 2014
0 Comments
Our Rating 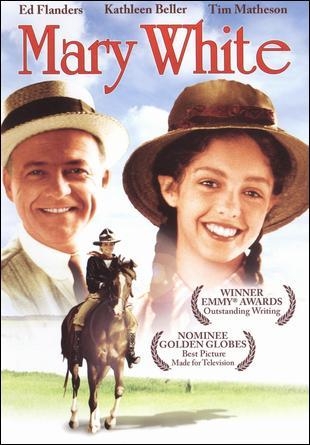 Mary White is the true tale of a feisty, opinionated young woman who loved fast horses.  Sometimes she was so feisty and opinionated that it seemed as though someone might just snap and choke the girl to death.  Other times she rode her horse so fast that it seemed certain she would be thrown to her death.  No one expected her to meet  her end while riding her horse at a leisurely pace and doing a friendly parade wave to the townsfolk, but that’s exactly what happens in the first few frames of the film.  In fact, we watch this fatal accident take place in slow motion.  Her head slooowly approaches a low branch, we freeze-frame on impact, and then she falls from the horse, stunned, before dropping dead to the ground.

It’s such a jarringly tragic and graphic start to the story that it’s almost comical, and it only becomes funnier when her father, Pulitzer Prize-winning author William Allen White (played by Ed Flanders), launches into a strangely matter-of-fact retrospective of her life.  He wanders from his office and through town as he remembers his late daughter, his narration strangely similar to that of the snowman in Rudolph the Red Nosed Reindeer.  Though his fondness for Mary (Kathleen Beller) is evident, something about his tone isn’t quite right.

The bulk of the film chronicles Mary’s teen years, creating a portrait of a young woman who was poised to take on the world.  Inspired by feminist Jane Adams, Mary becomes an outspoken champion of equal rights.  She wants to ensure that her African American classmate has the same opportunities as everyone else, and she eagerly speaks up on behalf of the underprivileged.  Unfortunately, her own status as the daughter of a prominent author often gets in her way.  How can she possibly understand what it means to be black, or poor, or simply from an ordinary family with no famous friends?

Shortly before her death, Mary and her father take a train trip that cements their relationship.  She makes peace with her identity and generally seems to settle down.  Though her convictions remain firm, she learns to behave in a less feather-ruffling manner.

By the end of the film it’s clear that Mary White was making the transition to adulthood with grace, and indeed, I felt a little teary when Mr. White paid a heart-rending visit to Mary’s grave.  After nearly two hours, it seemed as though the film finally gave proper weight to the poor girl’s death.

As a movie, there’s really nothing wrong with Mary White.  It’s wholesome and straightforward, tragic and vaguely inspiring.  It’s family-friendly and completely clean…but it’s also about a young woman who dies right in front of us.  Plus, the film is roughly as didactic as Mary White herself, and anyone with a shred of cynicism in them is bound to wind up rolling their eyes and making fun.  It doesn’t miss the target entirely, but it certainly doesn’t hit the bull’s eye either.