Little Ashes is a character study of two young men with passionate, tortured feelings for each other… they just happen to be the famous artist Salvador Dali and the poet Federico García Lorca. (And yes, you do get to see heartthrob Robert Pattinson kiss another man.)
By Lindaon December 11, 2012
0 Comments
Our Rating 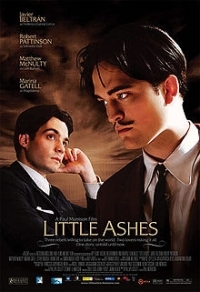 In the late 1920s in Spain, the paths of some extraordinary young men crossed paths at an art school in Madrid. Federico García Lorca (Javier Beltrán) was already well on his way to being a renowned poet. His pal Luis Buñuel (Matthew McNulty) had a fierce passion that he hadn’t yet directed towards an art, though Paris lured him (and eventually filmmaking). And one day, into their established social circle, walked a peculiar young man named Salvador Dali (Robert Pattinson).

This is when we meet Salvador Dali at the beginning of Little Ashes, and the first thing that comes to mind is: What is up with this Salvador Dali character? Is Salvador shy? Withdrawn? Maybe even a little weird? He sure looks it, with his foppish puffy sleeves, Little Lord Fauntleroy collar, and pageboy hair. He comes from the country, and these urban artists with their short hair and fashionable suits don’t quite know what to make of him. Still, they welcome him into their circle.

The group of friends become distant as Frederico and Salvador become more and more enamored of each other. They are both supremely talented artists and enthusiastically support each other in the creation of their respective art. It is obvious that Frederico has fallen in love with the handsome, brooding Salvador. And it seems that Salvador has, too—fallen in love with himself, that is. Despite intimate holidays at the seaside, and languid lounging on the beach, Frederico lusts for his friend, but Salvador is never really quite there. He seems receptive, then suddenly skittish when Frederico makes it gently clear what he feels. (And yes, you do get to see heartthrob Pattinson kiss another man).

Little Ashes is more of a character study of two young men with passionate feelings for each other, rather than a biopic portrayal of a couple of men who ended up becoming extremely famous (with very different fates). I liked this about the film, that I had to remind myself, “Oh, that’s right, that’s Salvador DALI, and his homophobic buddy Luis is the director that later made the classic Beauty and the Beast!” There are just enough examples of their art to remind you who we’re watching: Frederico is given the opportunity to recite some of his poetry; you see some of Dali’s paintings; and after Dali flips out and runs off to Paris to join his pal Buñuel you get to see the most famous snippet of their bizarre film collaboration Un Chien Andalou… (they’re slicing up eyeballs! Whoa-hoa-hoa-hoa!). But as a nod to the actors and the story, the fact that these people became famous really becomes secondary to the emotionally intimate story of personal heartbreak.

To its credit, Little Ashes makes you want to find out more about Dali and Garcia Lorca. Though Robert Pattinson often seems to be overacting (with his silly moustache that he presents on his return from Paris, combined with that crazy stare), I had to mention to my friend that as goofy as his performance was, it was really not an exaggeration of the famously freaky painter. So that leaves Javier Beltrán to provide the heart and soul of the movie, as the very sympathetic character of a man who is desperately in love with someone he can’t quite pin down. Though the pacing of the film is a bit off (as it awkwardly—yet importantly—ties in the backdrop story of fascism and the Spanish Civil War), it is still emotionally involving enough to hold your interest. Salvador Dali’s personal life is given a new dimension, but it is García Lorca’s story ultimately breaks your heart. 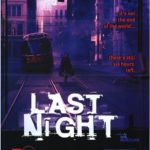 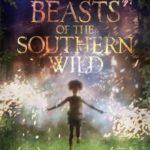