Moviepie’s Linda, Tom, and Tim needed to unwind together after watching The Exorcist (Extended Director’s Cut aka The Version You’ve Never Seen!)… 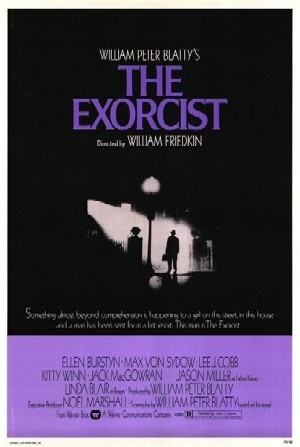 LINDA: Well, let’s just say I’ll never think of the happy sound of “the pitter-patter of tiny feet” the same way again. One of the most-touted scenes that was added to this re-release of The Exorcist is of newly-possessed Regan (Linda Blair) scampering on all fours—on her back—down the stairs. You see the horrifying image for a split-second as her mother turns to look, then the camera angle changes as Regan rushes toward the camera until her gaping mouth, dripping with blood, fills the screen. The image is held for a second too long, then fades to an extended black-out. Or maybe it was me that blacked-out.

TOM: I’m still looking for the ultimate movie that will totally disturb me, keep me up at night, and scare the crap out of me. Yes, I would have to agree with Linda on the spider walk down the stairs: that was a good scene that I think should have been kept in the movie. As for the scampering of little feet in the attic, I have the perfect situation for watching this movie at home. My two rabbits live in the bedroom directly above my living room, so I very often hear the scampering of little feet above (but without the deep growling!).

TIM: I have always been a bit terrified of movies that have extended silent periods. This allows the imagination to wander, so when something DOES happen, you are more reactionary to the situation. This is the element of the film that I think got me. I admit it, I DID have to take a personal moment after the crab crawl down the stairs. It creeped me out a bit more that I would like.

LINDA: I have to say that the possession scenes DO retain their unique ability to scare. For some reason these scenes, which have no special effects or CGI gimmicks, are still some of the downright creepiest ever put to film.

TOM: One scene that I found powerful and rather disturbing was early in the movie where the priest was standing on a desert rock in Iraq, looking across at the demon carved in stone at sunset. It would have been, “Yeah, so what?”… but the frightening part was the sounds of wild dogs fighting that really added creepiness to that scene quite nicely! (The Cinerama version with the re-mastered surround sound was fantastic. In one quiet scene the whole audience jumped when what seemed to be a HUGE telephone rang behind and to the left of us.)

TIM: The “dated” portions of the film added a somewhat comical effect that, I’m sure, the filmmakers did not intend to have there. It’s just the sight of a doctor lighting up a cigarette in the hallway, immediately after leaving the examination room… There were quite a few of these types of instances that brought the audience to small fits of laughter. Other than that, the film is just as I remembered it—disturbing.

LINDA: A friend of mine pointed out that I should be sure to warn potential viewers that not only is the language in the movie surprisingly graphic, but you are bound to hear people in the audience cursing exclamations back at the screen in disbelief. There is some touchy-feely-ness added to the film, especially with the fleshing-out of the detective character; plus the beginning third of the film is kind of slow… But the extra footage, and especially the souped-up sound, definitely make re-release of The Exorcist worth another viewing.

The Exorcist Director’s Cut is now available remastered on DVD, Blu-Ray, for Download, and On-Demand, featuring those 12 extra minutes of footage (including the infamous crab-crawl) restored and incorporated into the film. Plus there is commentary by director William Friedkin, theatrical trailers, and radio and TV spots for the 2000 re-release of “The Version You’ve Never Seen!”