Though the show is still finding its feet in Season 1, it is remarkably strong and holds up well.
By Jenniferon March 16, 2014
0 Comments
Our Rating 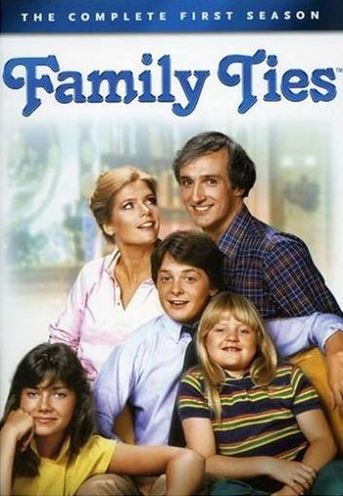 Television can be a pretty bleak landscape these days, but if I look at it from a kid’s perspective, I actually feel kind of sick. When I was a little, you didn’t need cable to find age appropriate programming. With just 3-5 channels and a good pair of rabbit ears, you could find cartoons before and after school, a family sitcom for every night of the week, and plenty of specials to spice things up. In the realm of network television, these are all endangered species, and I feel so lucky to have been young when TV was kid-friendly. I LOVED my shows, and not in a mindless, time-killing way. I related to these TV families and took comfort in knowing they faced the same problems we all do. In a way they felt like friends. Thankfully we can visit some of them through the magic of DVD, and I couldn’t have been happier to see the Keatons in Season 1 of Family Ties.

Michael Gross and Meredith Baxter-Birney star as Steven and Elise Keaton, former hippies raising typical children of the 80s: vacuous, materialistic Mallory (Justine Bateman), greedy, super-Republican Alex (Michael J. Fox), and little tomboy Jennifer (Tina Yothers). Steven works for the local public television station, and Elise is a freelance architect, but they still uphold the values of the 60s, much to the embarrassment of their children. It’s a rare case of parents being more liberal than their children, and sets the stage to address issues that are even more relevant today. One episode finds Steven and Elise spending Thanksgiving in jail after being arrested at a protest rally! Their political activism is approached in a lighthearted manner, but it’s always clear that these are two people who are willing to exercise their rights and speak up for what they believe.

As Mallory, Justine Bateman is surprisingly three-dimensional. She’s not especially bright when it comes to academics, but she’s sharp when it comes to fashion and matters of the heart. She also gets some of the best lines, and squeezes in plenty of subtle jokes about her diminutive brother (“Keep your tiny hands off that!”) For all of her sarcasm, she’s always there for her family when the chips are down.

In one of my favorite episodes, a trusted family friend makes a pass at Mallory, and she struggles to handle the situation gracefully. Like so many of us, Mallory is afraid to jump to conclusions. Surely her “Uncle” Arthur didn’t mean to make a move on her… Or did he? Is there really any other way to interpret a pat on the fanny? The often underestimated Mallory tackles the issue head-on, and stands up for herself firmly but respectfully. I could have cheered when when she refused to shake Arthur’s hand at the end.

Michael J. Fox may have emerged as the show’s star, but his character is so over the top, it’s almost hard to take. As the tightly-wound Alex, Fox is always good for a laugh, but rarely comes off as a real person. Comedy ensues as he tries to mould his Little Brother in his image, takes on the stock market with his father’s money, and launches an affair with an older woman. He was certainly an icon of the 80s, but by now, I’m tempted to say I could do without him.

Finally there’s Jennifer, who frequently parades through in a Critter Sitter’s nightie and drops witty one-liners. She’s often the token cute kid, but she holds her own and defies stereotypes by playing with boys and excelling at sports. She may be the youngest, but you’ve got to admire her spunk.

Though the show is still finding its feet in Season 1, it is remarkably strong and holds up well. Tom Hanks guest stars as Elise’s fugitive brother, and we get glimpses of goofy, lovelorn neighbor Skippy Handleman (Marc Price), but it only made me want more—more characters (Skippy! Nick! Ellen! Lauren! Not Andy!), more guest stars (River Phoenix! Geena Davis! That kid who played Chunk in The Goonies!), more episodes! What can I say? I can’t wait for Season 2.