Put Sylvester Stallone in a rainbow colored terry-cloth robe and let him have a conversation with Scooter, and I swear it will melt your heart.
By Jenniferon August 15, 2013
0 Comments
Our Rating 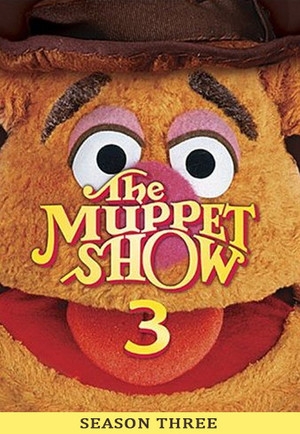 Goofy as The Muppet Show may be, it serves as an amazing time capsule for the late 70s and early 80s. As I peeled the plastic off the DVD edition of Season 3, my heart started to thump. I knew there was an episode I particularly wanted to see, but for the life of me, I couldn’t think who hosted. “Was it Barry Manilow?” I wondered, as I paused to admire the fuzzy Fozzie Bear on the cover. I slid the DVDs out, and then I saw it: it was Sylvester Stallone. Oh. My. Freaking. God.

As much as I loved Season 2, I was even more excited to see the guest list for Season 3 of The Muppet Show. Of course I skipped right to Sylvester’s episode, and enjoyed the whole half hour alternately smiling dopily at the TV and drooling. Keep in mind that this was 1979, and Sylvester was hot and sculpted and beautiful in a way that should have been against the law. Put him in a rainbow colored terry-cloth robe and let him have a conversation with Scooter, and I swear it will melt your heart.

From there, I skipped to the James Coco episode, and found him just as adorable as I did when I was a tiny little kid. Better yet was his rendition of Randy Newman’s “Short People”, which I actually remembered from my childhood. My family pretty much thought that was the funniest song ever, and it was even better coming from Mr. Coco.

After that, it was on to Liberace, another performer I inexplicably adored as a child. Watching him smile and joke benevolently with the Muppet gang reminded me why I found him so charming, and when he lit into his epic version of “Chopsticks”, I practically burst into tears. It’s funny and amazing and moving all at once, and to top it off, there are Muppets sitting on the piano! Where else are you going to see this?

Gilda Radner, Alice Cooper, Raquel Welch, and Danny Kaye are just a few of the other big names who appeared on Season 3 of The Muppet Show. The Muppets were at the top of their game in 1979, and even when they start to wear you out, you still walk away loving them. It can be a little taxing watching too many episodes in a row, so I’d recommend rationing them judiciously to get the most bang for your Muppet buck.

Bonus features include “Muppets on Puppets” a 1969 black-and-white special hosted by Jim Henson. In it, he tells you everything you ever wanted to know about puppets, then goes on to tell you about a thousand things more. (It’s actually a little exhausting.) “A Company of Players” goes behind the scenes of The Muppet Show and lets us get to know the puppeteers. Finally, “Muppets Commercials” takes us back to the 60s to see Rowlf’s black- and-white commercials for Purina Dog Chow. Priceless!