Though Fences is stagey (after all, it was a play first), it’s all about the acting. 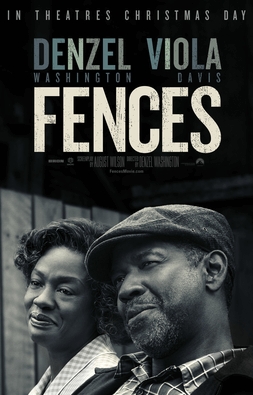 Denzel Washington takes the directorial reigns in the big screen adaptation of playwright August Wilson’s Pulitzer Prize-winning tale of an African-American couple in 1950s Pittsburgh. Denzel knows this story, and knows how to stock the film with top-notch actors. After all, both he and Viola Davis won Tony awards in the Broadway revival, so it is a no-brainer that he brought Davis on board.

Troy (Washington) is a drinking, charming, working class man. He shoots the shit with his old friend and co-worker Bono (Stephen McKinley Henderson, who is quite wonderful) as they ride the back of the garbage truck. Troy’s big aspiration is to be the first black driver of a garbage truck, but he’ll never forget to tell you that he really should have made it big-time as a professional baseball player (pay no mind that Troy is middle-aged). He was too old to play ball, they said, but you can’t help but have a sneaking feeling that there was something else that hindered him.

At home is his loving and supportive wife Rose (Davis). She doesn’t mind sitting on the back porch, listening and laughing with the men after their work shift, but she is kind of an enigma. I thought Rose was terribly underwritten in the first part of the film, but my friend pointed out that it was the trick of the screenplay to think Rose had nothing going on. Wait for the second half, as shit hits the fan in this married couple’s relationship. It is fully expected that Davis will not only get an Oscar nomination for Fences, but maybe even win, and that is fully because of Rose’s pent-up strife becoming a full-on explosion in Troy’s face when he tries to justify his sins to Rose.

Fences is a slow boil, as the family starts to unravel against the backdrop of shifts in society. The cast is all-around strong, from Jovan Adepo as the angry but good teenage son struggling not just for his father’s acceptance, but his love, to Mykelti Williamson as Troy’s brother, brain-damaged during the war. His character of Gabriel is not subtle, down to the trumpet he constantly carries like a security blanket, but he makes it work.

Fences is also a very “talky” film. Like a stage play, almost all of the scenes take place in very limited locations (in this case, almost entirely in the back yard or the kitchen of the house). Washington, as a director, doesn’t do much to make the experience more cinematic, so in a way it may as well be one of those “live theater” experiences sometimes shown on the big screen. But once you get over that aspect (it was initially distracting for me, I admit), you let the actors take the reins and pull you in. Come awards season, it is the acting in Fences that will be remembered.