In a funny first act, it’s like turkeys meet Contact and 2001… but the inspiration peters out halfway through the film. 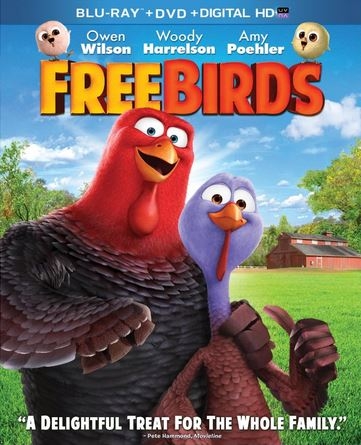 Just as one might wonder how the United States might have been different if our national symbol was the turkey (as Ben Franklin wanted) instead of the bald eagle, I’m sure turkeys themselves might wonder how their existence might have been different if some other dish were the main course at Thanksgiving. That is the basic gist of Free Birds, and it is not a bad one. If you are going to have a talking-animal animated film, the idea of earnest turkeys trying to change a national holiday via a time machine (!) is as good as any. Free Birds actually has an inspired first half hour or so, but then it falters into the predictable.

Reggie (Owen Wilson) is a scrawny turkey that is spared his Thanksgiving fate when the Presidential helicopter lands at the farm and he is plucked from obscurity to be the officially pardoned turkey. Knowing that his turkey brethren are screwed, though, makes Reggie want to do something about the unfortunate Thanksgiving turkey tradition. After all, a perfectly good pizza would be an excellent alternative.

Reggie’s cushy pizza-eating life as a Presidential pet (for the first daughter) at Camp David is rudely interrupted when a turkey named Jake (Woody Harrelson), from the Turkey Liberation Front, rescues Reggie again, and demands that Reggie combine forces with him to go back in time to the first Thanksgiving to change the tradition of eating turkeys once and for all. Time machine? Say what? Delightfully, turns out there IS a time machine, and Reggie and Jake end up in 1621, on the run from ruthless pilgrim hunters who are adamant that they are going to fill their tables with turkey meat for the upcoming shared dinner with the local Indians.

Now, Free Birds has a lot going for it. Like I said, the first chunk of the movie is actually pretty inspired and funny, down to George Takei playing the voice of the time machine named “S.T.E.V.E.” It’s like turkeys meet Contact and 2001. But when they end up in 1621, of course Reggie and Jake cross paths with a pack of wild turkeys that conveniently include a love interest for Reggie (played by Amy Poehler) and a renewed purpose for Jake. Ho-hum.

The film held my attention and made me laugh at the beginning, but toward the end I noticed that I started doing chores and playing with the cat. There’s a fun movie in here, unfortunately it peters out, fizzling on its potential.

There’s a short live-action film called “Birds Flipping History”, which is like a revisionist elementary school play with the pilgrims eating pizza (it all comes across kind of like a commercial). Among the more interesting making-of featurettes are “Animating the Free Birds” and “Winging It” that shows how the animators depending on live action for inspiration. And by live action, I mean the animators re-enacted parts of the movie as though they were the turkeys. Actually pretty funny… Who knew that’s how they could make a turkey dance!