I hate it when an Important Movie, especially one that is so well-intentioned, is actually kind of stinky.
By Lindaon July 12, 2016
0 Comments
Our Rating 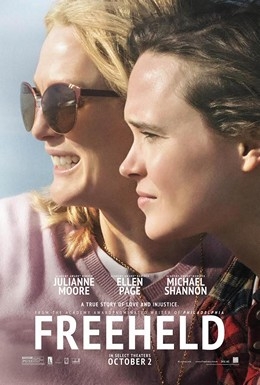 I think you are super-cute, a fine actress, and a refreshing gay-rights advocate. I commend you for grabbing this story to produce, as it is fascinating, heart-wrenching, and, yes, important for people to see. With marriage equality so fresh in everyone’s mind, it is a reality check to see that the real events of Freeheld took place not even a decade ago.

But I kind of wish the screenplay was written by someone other than the guy that wrote the tame, Oscar-bait (but cowardly) Important Movie Philadelphia (for goodness sakes, Tom Hanks was a SAINT that couldn’t even kiss his partner in a PG-13 movie!).

Now, I know that the story is based on true events in Ocean County, New Jersey, where detective Laurel Hester (played by Julianne Moore) wished her pension to be passed to her registered domestic partner Stacie Andree (Ellen Page), as Hester knew she was dying of stage four cancer. The douchiest douchebag county “freeholders” (the equivalent of a county council), voted her request down, even though the state law gave them the power to do good, and even though she was a 23-year veteran of the police force.

The problem is, Ellen, you look like a teenager, and Julianne Moore looks like she is gunning for an Oscar with her strange 70s hair-flip. Sure, Julianne is an outstanding actress, and, as terrible as it is to say, we all know she dies well on film. But the key to a believable romance, even with such a notable age difference (apparently reflecting the real-life Laurel and Stacie), is chemistry. And Ellen, you don’t have it with Julianne. Julianne has better friend-chemistry with Michael Shannon, who plays her partner on the force. In fact, the two of them have probably the best scene in the film when Laurel reluctantly and defiantly outs herself to him in the front yard of her and Stacie’s new home.

But, I see the earnestness behind the film… which is why it is really too bad that it is forgettable. It feels like a cheap courtroom drama (even though, it was pointed out, the freeholder’s town meetings are not actually a court). Steve Carell’s Gay McGayerson civil rights advocate and his cronies disrupt the meetings like a screeching, cartoonish circus. (“Shhhhuuuuuuut UP!” I wanted to tell them.) There are tears, deteriorating health, big developments, and changing opinions. And the whole time, Ellen, you looked like you were taking care of your big sister or your mom.

Anyways, Ellen, I heard that the short documentary that this film is based on is good (seriously, the credits said that the film was based on the documentary of the same name, like the screenwriter was too lazy to do any of his own research). I mean, anyone can see that the STORY is good. But it is too bad for you and everyone involved that this film, unfortunately, isn’t.