The phrase “walking a fine line” applies to this film both literally and figuratively: it’s a biopic of Phillippe Petit and his legendary tightrope walk between the twin towers of the World Trade Center in 1974, but it’s also a movie that teeters between being a delight and a dud… never quite falling completely towards one extreme or the other.
By Vickieon July 12, 2016
0 Comments
Our Rating 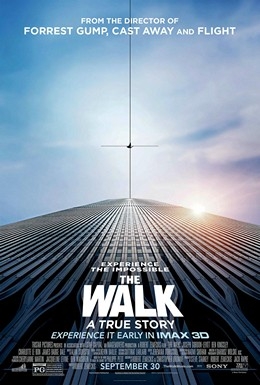 The always excellent Joseph Gordon-Levitt stars as the free-spirited Petit, but is unfortunately saddled with a seriously tragic – and hugely distracting – wig, an even more wobbly French accent and direct-to-camera narration that feels woefully clunky. None help flesh out his character, and all seem needless. Would anyone really have cared (or even noticed) if the hair he sported were his own, or if he spoke in his normal speaking voice, or if he wasn’t repeatedly telling the audience what he was thinking in a given moment? Anyway…

The film follows Petit from his early years in France, learning the tricks of the high-wire trade from circus veteran Papa Rudy (Ben Kingsley), to his time as a Paris busker – whose act is a blend of mime, magic and low-level wire walking. While performing, he meets and falls for Annie (Charlotte Le Bon), with whose support he decides to pursue his ultimate dream of going to America and hanging his rope between the World Trade Center towers… then walking across it.

During this “setup” phase for The Walk’s satisfying third act, the film plods along and could easily have been trimmed by half an hour, since the thing every moviegoer wants to see is the titular promenade some 110 stories above the streets of New York. A number of times I felt myself willing the story to hurry it up and get to the point, already.

Thankfully, the actual walk in The Walk lives up to the hype, and turns the entire film around in terms of pace and spectacle. Suddenly, time stands still in a good way, as every inch of Petit’s mind-bogglingly terrifying stunt – which he and his band of merry accomplices (Clément Sibony, César Domboy, Steve Valentine, James Badge Dale, Ben Schwartz and Benedict Samuel) affectionately refer to as “the coup” – becomes a gripping live or die moment. As well, there’s an undeniable emotional undercurrent to his wistful, post- crossing reflection on the cold, steel buildings to which Annie lovingly says he’s “given a soul.” I will admit, it made me teary-eyed.

Is all that enough to elevate the film to “must-see!” status, though? Not especially. Yes, The Walk ends strong and the visuals certainly deliver the “wow” factor, but viewers looking for an engaging glimpse at Petit and his accomplishment might be better served by Man on Wire, the documentary on the entire affair, instead.