Scouts Guide to the Zombie Apocalypse

This is one of those gross-out horror comedies with a bloody, gorey R rating, which finds itself in the conundrum of being aimed squarely at teens.
By Lindaon July 12, 2016
0 Comments
Our Rating 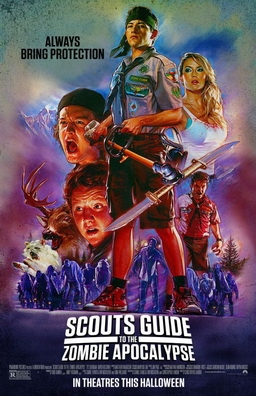 As you may figure from the title, our heroes are a trio of Scouts who have to muster their courage and merit badge skills in order to save their suburban town from a zombie apocalypse. On the verge of becoming high school juniors (when apparently high school pussy is unleashed upon all boys, or so the characters believe), it has become kind of embarrassing for earnest good guy Ben (Tye Sheridan) and Carter (Logan Miller) to still be in Scouts. But they do it out of begrudging loyalty to their nerdy childhood friend Augie (Joey Morgan). But when Ben and Carter ditch Augie on a Scout camping trip to go to a senior party, the evening doesn’t go quite as planned. The zombie plague has been unleashed upon the town!

That is pretty much it.

In this film, you will find:

* Zombie boobs
* A zombie penis
* Zombie Cloris Leachman
* Zombie cats
* A super-hot, zombie-killing “older” chick
— Did I mention she wears a tight white tank top, can shoot a rifle, and ride a motorcycle?
— Did I mention that she is NOT a stripper, but a cocktail waitress at a strip club?
— Did I mention she gives a lesson to one of the boys on how to make out with a girl?

See, you know what you are getting. The film is kind of funny, but never howlingly funny, like it thinks it is. But maybe, probably, the target audience doesn’t need or expect a Shaun of the Dead or Zombieland….