The latest comedy from writers-directors-producers Joel and Ethan Coen is the very definition of “uneven.” For every brilliant moment in this homage to the Golden Age of Hollywood, there’s a clunker. For every winning performance, there’s a dud. And for every delightful sequence filled with whimsy and fun, there’s a boring stretch that makes minutes feel like hours. Watching it is a veritable see-saw of enjoyment.
By Vickieon July 12, 2016
0 Comments
Our Rating 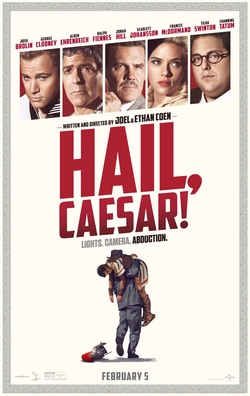 In the day-in-the-life film, Josh Brolin stars as a fictionalized version of real-life Hollywood studio exec Eddie Mannix, who – to protect Capitol Pictures and the reputations of its talent – spends his days reining in movie stars and covering up their scandals, proclivities and sins. Among the glitterati, film-biz insiders and assorted hangers-on orbiting his world on this given day are: naive cowboy-picture heartthrob Hobie Doyle (Ahren Ehrenreich), whose drawl is as thick as his skull; DeeAnna Moran (Scarlett Johansson), a pregnant-out-of-wedlock actress; director Laurence Laurentz (Ralph Fiennes), who’s trying to shoot a period drama; light-on-his-feet singer-dancer Burt Gurney (Channing Tatum); rival twin gossip columnists Thora and Thessaly Thacker (Tilda Swinton); and leading man Baird Whitlock (George Clooney), who’s kidnapped by a group of communist writers.

For Eddie – and the filmmakers – there are myriad balls (be they characters, plot points or gorgeous set pieces) to juggle… and not everything works.

YAY! There are a couple of throwback film sequences that are absolutely spectacular in every sense of the word: one involves DeeAnna in an Esther Williams-y aquatic number, and the other features Burt in a Gene Kelly-worthy musical number in a bar. Both are brilliant.

BOO. Too bad the same can’t be said of the entire Baird Whitlock storyline, which brings the film to a screeching, yawn-inducing halt every time the action moves to the beachfront home where he’s being held captive. SO BORING.

YAY! Tilda Swinton and Frances McDormand are hilarious in their glorified cameos – short, zippy scenes that are funny, lively and clever.

BOO. Why is Jonah Hill even *in* this movie? His role – which is about 30 seconds long – is a complete throwaway… and not very interesting.

YAY! The period detail is great, and the art department has created a rich, TK backdrop against which the action plays out.

BOO. Unfortunately, the film feels like an edited-down version of a (much better) six-hour miniseries, as though there’s much more to be seen, story-wise, from all these colorful characters. I wanted to see more of Hobie, DeeAnna, the Thacker sisters and Laurentz, and their respective misadventures, instead of following Eddie around (yawn) or checking in on the tedious Whitlock- napping (YAWWWN).

As I say, Hail, Caesar! bounces back and forth between entertaining and… not. I wasn’t sure what to make of the whole thing, except to think that maybe there are several hours of extra footage kicking around somewhere that, if stitched back in, could turn this mish-mash into a masterpiece.