Just before writing this review, I read another one calling it, among other things, “lazy.” And I think that’s an apt description of this unfunny, unconvincingly raunchy comedy that must have been pitched as “Bridesmaids meets The Hangover meets Weekend at Bernie’s!” Because it blatantly borrows from all three of those films. Poorly.
By Vickieon January 27, 2018
0 Comments
Our Rating 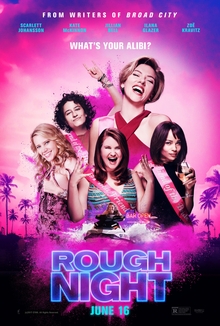 Intended, I guess, to be some kind of R-rated girl-bonding movie that will remind audiences once again that women can behave just as crudely and badly as the fellas, it’s pretty awful all around. (After sitting in stone silence through all of the credits, and as we were exiting the theater, my movie-going pal finally turned to me and said, “That was really terrible.” I was so relieved we were both on the same page.)

Scarlett Johansson phones it in as Jess, a U.S. Senate hopeful who’s been corralled into a wild weekend in Miami before she ties the knot with her fiancé (Paul W. Downs, who co-wrote the screenplay). Alice (Jillian Bell, the film’s strongest player), her clingy best friend from college, plans the whole thing and recruits their former dorm mates – über-successful Blair (Zoë Kravitz) and her one-time girlfriend, grating social-justice warrior Frankie (Ilana Glazer) – to join them for what she hopes will be a few days of wild debauchery and new (if fuzzy) memories. Tagging along is Pippa (Kate McKinnon, who dials up “weird and quirky” way too high here), Jess’s new age-y Aussie pal, and all the women are painted with the same clichéd brush that makes them caricatures instead of three-dimensional characters: the career woman! the flake! the activist! *yawn*

If you’ve seen any of the trailers for the film, you get the gist of how everything goes awry: the ladies spend their first night getting hugely trashed – because doing cocaine is funny! – and promptly (if accidentally) kill a dude (Ryan Cooper) – because accidental death is funny! – in a desperate and misguided lap-dance moment – because a horny “big girl” is funny! OMG, it’s all so not funny. Our BFF heroines then spend the next 70 minutes or so trying to hide/dispose of the body… because in a movie like this, just calling the police isn’t nearly as laugh-riot-worthy as, say, squeezing a corpse into a Smart Car – because he’s big and the car is small and that’s funny!

Plodding along without any pep or spark, Rough Night really really wants to be edgy, but it’s like no one really wants to commit to crossing any lines in any kind of new, interesting or hilarious ways. The filmmakers keep trying to be “outrageous,” but none of it feels original or fresh. The proceedings are as flat and lifeless as the dead body the women keep moving around. There’s also a completely pointless subplot involving (the usually-great) Ty Burrell and (a totally wooden) Demi Moore as a lascivious swinger couple desperate to get into Blair’s pants, but it all feels contrived and more than a little creepy. Why are those two even in this movie???

A chore from start to finish, Rough Night is ultimately another sub-par addition to a genre of films that I really hope dies out soon: the R-rated chick flick meant to shock but which, instead, just sucks.