There is some romance, some drama, more mysteriously dying guests, and literally lots of song and dance. And I laughed my ass off.
By Lindaon June 9, 2012
0 Comments
Our Rating 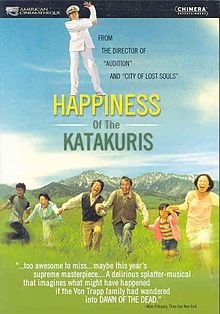 Director Miike Takashi is one busy man. Churning out seven movies in 2001 alone, he certainly doesn’t let genre limitations control what films he makes. Known best in these parts for the horrifically memorable young-bride-gone-wrong film Audition (which had Seattle Film Festival audiences running for theater exits in the last act), Takashi takes a 180 turn from that film, then another turn, then another. Taking ingredients from all possible movie genres (and I’m not exaggerating), he comes up with the completely whacked-out Happiness of the Katakuris.

Happiness of the Katakuris is a horror movie. It is a comedy. It is a musical. It has melodrama. It has a Bollywood-style song-and-dance scene. It even has a karaoke sing-along, with captions so you can join in with our suddenly overly-made-up stars sing earnestly under disco lights. Oh, and did I mention the claymation special effects?

The Katakuris are a multi-generational family that open a lodging house in the mountains. The scenery is gorgeous, the house is big and well-cared for, and they are eager to serve. Except that there are no guests. Hmmm. Finally one lone traveler arrives, of course on a dark and stormy night. But when the family goes to check in on him the next morning—gasp!—he is dead on the floor with a knife through the neck! Like anyone else would do in that situation, they immediately break into a heavy metal song (complete with arena-rock lighting) and kick down the walls of the house with an interpretive dance. Well!

And that is just the beginning. There is some romance, some drama, more mysteriously dying guests, and literally lots of song and dance. And I laughed my ass off.

Happiness of the Katakuris is not for everyone. In fact, one of the passholders at the festival warned me off of the film when I told her I had planned to see it. She had gone to the afternoon press screening where the film got absolutely no response (I imagined the critics sitting stone-faced through the film, with the occasional muffled clearing of the throat breaking the suffocating silence). But obviously the film played differently to a raucous late-night packed house who had shelled out good money to see it.

Director Miike Takashi was in attendance to answer questions from the audience. Someone asked how the film was received in Japan. He said it didn’t go over well. The film was so bizarre, that people just didn’t get it. When asked what he thought of the Seattle audience’s response, if we had laughed at all the right moments—Takashi smiled and said, “You got it. You got it.” 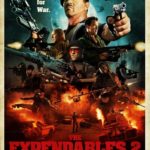