With its super-effective sensory-scrambling scares, the ghost story The Night House is still totally carried by Rebecca Hall as a grieving woman who believes her dead husband is haunting her. 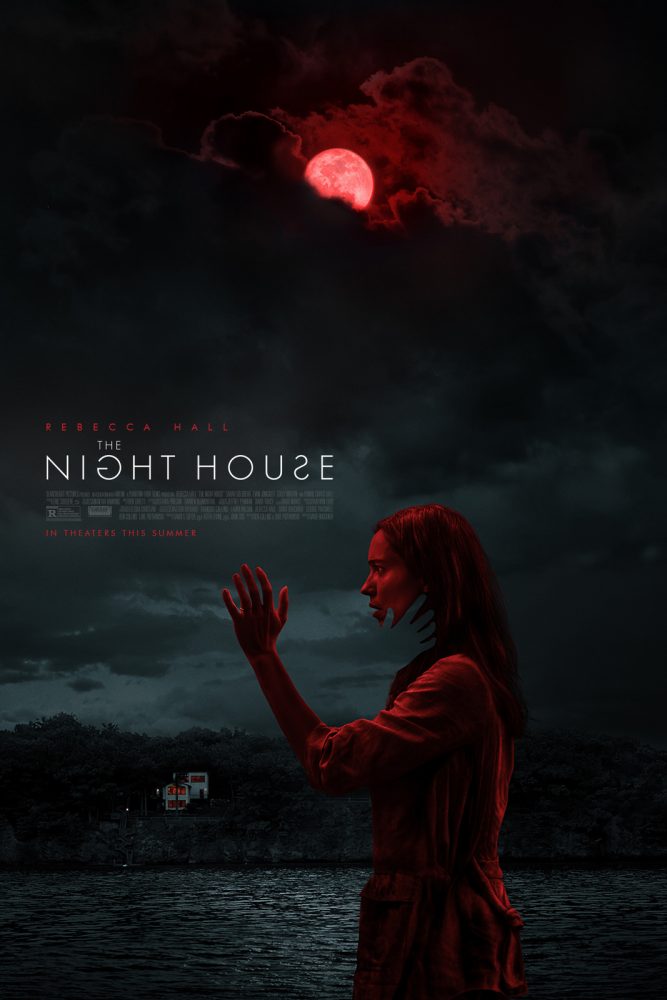 Beth (Rebecca Hall) is a grieving woman. We meet her, dressed in black, being dropped off at her house by a friend who earnestly hands her a casserole dish. As soon as Beth is in the house, she dumps the casserole in the trash and cracks open a bottle. The Night House takes its time introducing us to the woman before revealing the details of her personal tragedy. When Beth witheringly tells the mother of one of her students that she missed her kid’s final presentation because her husband took a boat out on the lake and shot himself in the head, the poor mom is as shocked as the audience. (Take note that Rebecca Hall, whom I’ve always called That Nice Rebecca Hall, nails this role with her wit, paranoia, fierce intelligence, and vulnerability.)

Now that we know how husband Owen died, it makes sense that Beth is not only grieving, but is really mad. Other than the cryptic note he left, there was no inkling that Owen was suicidal, leaving Beth flailing and furious. Combine that mood with excessive drinking, and Beth starts to hear and see things in the lake house that they shared. Classic haunted house things start to happen: the stereo comes on in the middle of the night, the stairs creak while she is alone, a handwritten word appears on the fogged up shower door. But is Beth imagining these things? It doesn’t help her case that she wakes up on the floor with an empty bottle next to her.

Except for a few supporting roles that make an impression, including Sarah Goldberg as her concerned best friend and Vondie Curtis-Hall as the well-meaning neighbor in their remote community, The Night House is almost entirely carried by the versatile Rebecca Hall. Because her character is so complicated, and her response is so… human, it is easy to invest in her and give her the benefit of the doubt that something, indeed, is very wrong in the house.

But you want to know if the movie is scary, right? Well, I got to watch the movie alone with a home screener, and there is one point of the movie that made me scream, “GAHHH!” and my skin literally prickled in fear. I love me a scary movie, but honestly, that doesn’t happen often. Director David Bruckner and screenwriters Ben Collins and Luke Piotrowski play as much with the twisty plot as they do the sound and visuals…. For instance the really juicy scare I mentioned was one of the cruel types: no warning or setup, but the horror equivalent of suddenly blasting a bullhorn next to your ear so that you have no choice to soil yourself.

The Night House starts to veer wildly in the final portion, with several big reveals that are a little confusing, and don’t necessarily add up cleanly. But the final busy part of the movie is really my only complaint about what is otherwise one of the more effective horror films I’ve seen in a while. I’ve always veered away from blood and violence in movies, much preferring stories that confuse your senses and mess with your imagination. The Night House will certainly mess with you.