Whew! Well, we can finally call another epic movie series to a close. As has been the tradition of milking as much money out of adapting a hugely successful series of books into a hugely successful series of movies, Mockingjay has been milked for all its worth–and yet another single book has been stretched out beyond belief into two movies, watering down what should otherwise be a tight, gripping story. 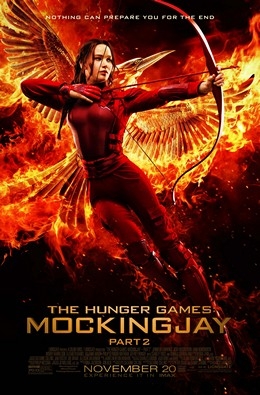 We pick up where we left off with Part 1‘s cliffhanger: Peeta, played by Josh Hutcherson, has been brainwashed, trying to kill Jennifer Lawrence’s Katniss upon their reunion. Needless to say, the young-love darlings of the brutal Hunger Games are kind of messed up now. Katniss has lost her spark, and Peeta has literally lost his mind. Katniss no longer wants to be President Coin’s figurehead (though it is fun to see Julianne Moore morph from rebel leader into potential dictator); Katniss just wants to kill the Capitol’s brutal President Snow (leering Donald Sutherland).

As the book Mockingjay has been a bit over-stretched into two films, Part 2 has plenty of time to have Katniss and her elite team of soldiers and propagandists (including Gale, Finnick, and completely freaked-out Peeta, inexplicably thrown into the group with handcuffs) race into the booby-trapped, bombed-out Capitol. It is pointed out that their quest is almost like another Hunger Games, but in an urban environment as televised danger lurks around every corner. There is still plenty of time for carnage to be had for the bloodthirsty Snow.

Mockingjay – Part 2 (like Part 1) ends up being in serious need of a tight edit. There are thrilling scenes, and the imagined universe of Panem is still visually stunning, but even the actors seems a bit stuck on auto-pilot as they are forced to stretch out the plot. The other movies had loss of innocence, but in this film, Katniss pretty much loses her soul (not to mention the series loses some beloved characters). But with all of that, unlike the first two films, I found that didn’t shed a single tear in Mockingjay – Part 1 or 2. Amongst this bloated two-parter, I know there is a solid movie, but in this case, I think I’d like to see a director’s cut that was actually trimmed instead of expanded. This otherwise impressive series deserves that.