When Ig proclaims, “I should ask the devil to punish whoever killed her…”, well, guess who wakes up with horn nubs on his forehead the next morning?
By Lindaon January 26, 2015
0 Comments
Our Rating 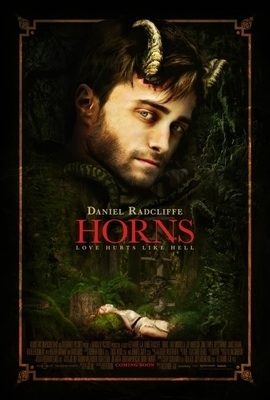 I’m a sucker for religious horror films, from possession to demon dolls to angels falling to earth. When I saw the ads for Horns, showing That Nice Daniel Radcliffe bedeviled by the horns he has sprouted overnight, I was all over it. Unfortunately, the idea of Horns is better than the final product.

We meet Ig (Radcliffe) right after he has been accused of murdering his long-time girlfriend. Sweethearts since they were teens in their small town, Ig and Merrin (Juno Temple) had the seemingly perfect relationship… that is until Merrin is found raped and murdered at their favorite spot in the woods. The town, unsurprisingly, turns on Ig, who doesn’t really have an alibi, and has everything to prove. When Ig proclaims, “I should ask the devil to punish whoever killed her…”, well, guess who wakes up with horn nubs on his forehead the next morning? Doesn’t really help your argument of innocence when you look like the devil, does it?

Horns has a fun idea, but it is inconsistent on its delivery. Ig quickly discovers that those who see his horns are rendered completely honest in his presence and succumb to his powers of suggestion, which makes for some amusing scenes, from a man taking off his pants in a bar, to a woman proclaiming the wish to toss her screaming child off a bridge to be done with it. As Ig is even privy to his own family’s “inner” thoughts, you have to feel for him when mom gives him a big matronly hug, then tells him that she wishes he would go away. But as Horns continues, it turns into a typical murder mystery and gets very very dark. Ig, surrounded by clues and information from his friend (Max Minghella) and brother (Joe Anderson), tries to clear his name and find the real killer.

Horns is by no means a complete washout. I liked the setting (the Northwest) and the idea (a man given the power of the devil to deal with his own demons), but the story was raggedy and inconsistent, and honestly too long. When it turned from a quirky, twisted comedy, to brutal-flashback murder story, I started to lose interest. But Radcliffe fans will probably still be interested to give it a try. His American accent may not be the best, and he spends the whole film in a state of almost hysterical angst, but he is still appealing. Plus you get to see him have “the sex” on screen, so there’s always that. 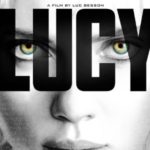 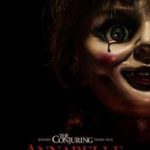