Partly by design and partly by coincidence, my entire day – in terms of screenings and experiences – somehow dealt with waiting. Literally and/or figuratively. 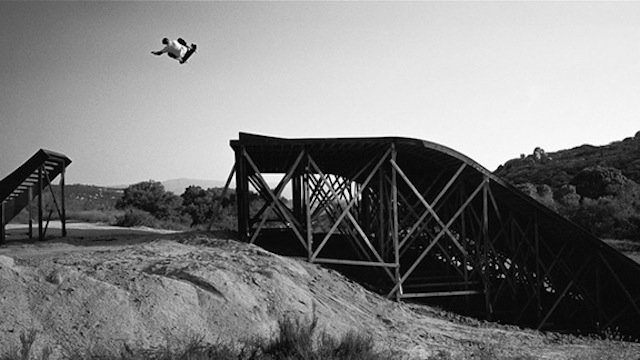 First up was Waiting for Lightning (6/8), director Jacob Rosenberg’s film about pro skateboarder Danny Way and his decision to try to jump over the Great Wall of China. On his board. Weaving preparations for the jump with Way’s turbulent life story and interviews with his family and friends, Lightning traces the origins of his daredevil – and, sometimes, reckless – tendencies. And, while Way’s accomplishments are hugely impressive and his skills undeniable, the film delves a little deeper into the man behind the massive air to paint a portrait of a guy haunted by his past, who finds solace on the half-pipe.

While waiting in line for my second screening, I had the most delightful conversation with an adorable elderly fellow standing behind me. We chatted at length (we were out there for about 20 minutes) about the films we’d seen and the festival, in general. Then, as we were let into the theater, he disappeared… and never showed up in the cinema. I wasn’t sure if his daughter, who was joining him for the film, bailed or if he discovered he’d been in the wrong line. I’ll never know! 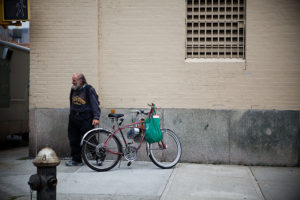 The film was Radioman (4/8), which turned out to be another one of those films that leaves me feeling a little uncomfortable for its subject – in this case, an elderly, pseudo-homeless movie fan in NYC, who’s become a fixture at so many location shoots in the city that Hollywood actors and film-crew members know him by name. Craig “Radioman” Schwartz LOVES movies and LOVES movie stars, and tools around on his bike going from set to set, occasionally landing a part as an extra. But there is clearly also some kind of mental disconnect happening with him. He lives in a hovel filled with garbage and cockroaches, he behaves as though he’s homeless and he believes that these famous actors are really his friends.

Director Mary Kerr clearly feels affection for Radioman, but the film nonetheless feels strangely exploitative. Heaps of Hollywood stars – including Tom Hanks, Matt Damon, Johnny Depp, Sandra Bullock, Meryl Streep and Robin Williams – appear on camera to comment on Radioman, but some of it (Josh Brolin, I’m looking at you) feels more like the actors patting themselves on the back by talking about the relationships they have with this man who lives in abject squalor and probably makes very little from his “work” as an actor. One crew member goes so far as to talk about how “happy” Radioman is living the way he does, “with his cockroaches.” Really? “Happy?” The same way the hoarders on Hoarders are “happy”? I had to leave before the Q&A got underway, but I’d be very curious to know how many of these celebrities have seen the film, how many of them realize what Radioman’s home life is really like and what, if anything, any of them have done to lend their “friend” a hand. 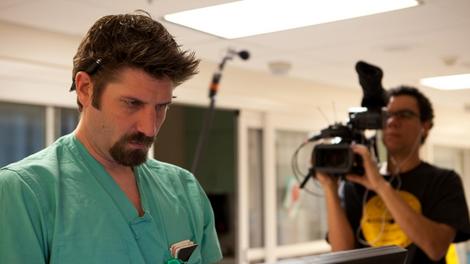 Last up was The Waiting Room (7/8), which centers on the Emergency Department waiting room at Oakland’s Highland Hospital. A public hospital servicing a largely lower-income community, Highland is woefully overburdened with a huge influx of patients and a clear deficit in resources, staffing and beds. Director Peter Nicks simply lets his camera roll as staff – including SPECTACULAR nurse assistant Cynthia Johnson (she is amazing!) – triage incoming cases and set about providing the best care they can under often challenging circumstances.

Verité at its finest, The Waiting Room was gripping from the get-go and I wished it had been at least another hour longer. All the people in it are compelling and the situations, especially when it comes to the bigger issue of health care, interesting… and I have no doubt there was a wealth of extra material that could have been spun into a super-beefy running time. When Nicks referenced working at ABC News during the era of TV series like Boston Medical and Hopkins 24/7 (two shows I absolutely loved), I thought, “YES, that’s exactly what this film is like! Highland 24/7!” Which was more than fine with me.

UPDATE: After posting my review of “Radioman,” we at the ‘Pie received a message from Paul Fischer, one of the film’s producers, clarifying some of the issues I had with the film. With his permission, below is the full email. We’d like to thank Mr. Fischer for his thoughtful explanation and for taking the time to share it with us:

Thank you so much for taking the time to watch RADIOMAN at Hot Docs, and to engage with it the way you did – it took four years for us to make the movie and it was a genuine labor of love, and for it to be written about and elicit any reaction other than indifference is a real privilege. I wanted to quickly write to address some of the things in your review that I feel are mistaken conclusions, not essentially about the film itself, but about the people in it. As the end of your review mentions being curious about some of these things, I hope this isn’t too unwelcome.

First of all I’m not quite sure why the film felt exploitative, unless that comes from Radio being different, being “poor”, being any number of things. Radio is not mentally ill, and he lives his life independently. He agreed to the film, he gave his approval for everything that is shown in the film to be shown in the film, and has no issue with anything in the final cut, whether its content or how it is edited. We have kept him in the dark about nothing, and everything we show is with the intention that it will generate empathy and common ground, rather than judgement. As such I am not sure how the film could be exploitative. Radio’s answer to an interviewer, while at Hot Docs, on whether the film is an accurate portrayal, was: “Oh yeah, it’s accurate. Maybe too accurate at times.”

The exploitation argument always seems to come from the viewer being uncomfortable with something they see in a subject’s life. Radio deserves the same respect any “normal” person does, which is to be given a voice and have his life and lifestyle – all of it, even the uncomfortable parts, even the unconventional parts – heard before being judged.

In regards to the celebrities interviewed in the film – the idea that a friendship can only be defined in one, single, narrow way always surprises me. Radio is always there to encourage and support his celebrity friends when he has the chance, even if those situations are limited; and they (certainly every single person interviewed in the movie) have never encountered him in a situation of need without trying to do something to help and support him. Many have attempted to give him money, which Radio, to his credit, refuses to take. Helen Mirren offers to sort out his medical needs when he is ill. Whoopi Goldberg and Arnold Schwarzenegger have given him bikes when his breaks down. Robin Williams is worried he might get hurt, so has bought him a bicycle helmet, that Radio never wears. I’ve seen Josh Brolin – whom you single out – pick up and hug Radio at 6am outside his hotel, when he thought no one else was around, and stand half-an-hour on a sidewalk talking to him, while his assistants and publicists tried to drag him away to work.

The thing that is revealing to me is the idea that, because the celebrities are wealthy and famous, and because Radio isn’t, then their interactions cannot be genuine or worthwhile, as if the gap in material situations is everything. Radio values his interactions with them as one person to another, and the material gap is irrelevant. It’s one of the things that make him special, and one of the reasons he is valued by people who on the surface have so much more than he does.

And finally, there are the factual details in the review I wanted to take the opportunity to rectify – these are, I’m sure, our fault for not expressing them in the film clearly enough. Regarding the assumption that Radio “makes very little from his ‘work’ as an actor”: he is a Screen Actors Guild member, and makes the healthy union rate, with royalties, for every appearance. Regarding the “crew member” who mentions that he feels Radio is happy with the way he lives, “cockroaches” and all – this is Larry Holzer, a videographer who is also one of Radio’s close friends, and who knows Radio as well as anyone else. Furthermore we asked Radio the same question, and his answer is exactly the same. It is a mistake to assume that, because you or I could never be happy living the way Radio does, he must by definition not be happy with it either.

Thank you so much for your time – with the film and with this email. I’m more than happy for it to be published, or to answer any further questions if you do have an interest (I’m obviously not insulted if you aren’t – you can’t spend your life discussing every small doc you see at a film festival 🙂 ).