One of my favorite things about Hot Docs, and documentaries in general, is learning about something – a person, a place, a practice, an event, an idea, whatever – I might never have heard of before and might never have otherwise discovered. It happens every single year, and I always leave the fest feeling a bit like my brain’s grown a few millimeters as a result. 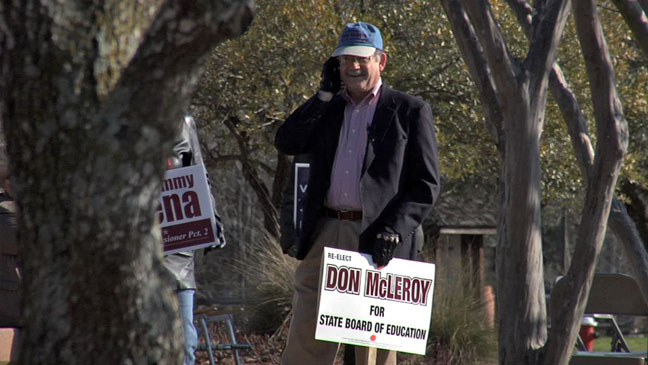 For example, until I saw The Revisionaries (6/8), I had no clue that the state of Texas – and its obviously flawed board of education – carried so much national clout in terms of textbooks. In simplistic terms: wherever Texas (which purchases more textbooks than any other state) goes, the publishers and, subsequently, the country follow. This wouldn’t be so much of an issue were it not for the fact that, in Texas, there exists an abundance of Creationists (i.e., folks who don’t believe in evolution), many of whom serve on the board of education and one of whom, Don McLeroy, wants science textbooks amended to reflect the possibility of intelligent design.

Director Scott Thurman crafts an intriguing film, which much of the action taking place in assorted board and council meetings where amendments to the existing textbooks are debated. Scientists and scholars attempt to show the surprisingly stubborn board members the errors of their proposed ways, especially with respect to how Texas students will suffer if the planned changes pass. And all the while, McLeroy – a jovial dentist (?!) seeking re-election as board chair – stands by his belief that humans were created alongside dinosaurs and that children should be taught as much.

It’s a frustrating (in a good way) film to watch, and there were many exasperated gasps and sighs of disbelief in the theater audience. But what Thurman does really well is paint a portrait of a well-meaning but confused guy who really, truly believes he’s doing a good thing. McLeroy is never presented as a villain or someone for the audience to despise; instead, he’s shown as flawed and human, which makes his story that much more engaging.