I think at some point in the next few days, I’m going to devote an entire entry to the inexplicable phenomenon of audience members STILL using their smartphones during festival screenings. It’s astounding, not to mention rude and inconsiderate in terms of both the offender’s fellow filmgoers, but also for the filmmakers themselves, who are often in attendance. What is WRONG with these people?! 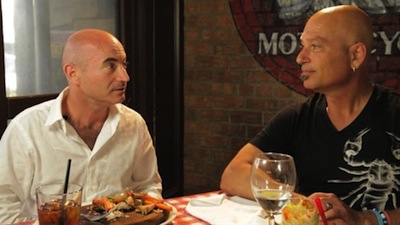 Though my first film of the day – director Howie Mandel’s Committed (5/8) – isn’t really a great documentary, it nonetheless possesses a certain underdog charm that mirrors the most notable quality of its subject: Vic Cohen, a super-determined would-be comic/actor, whose unrelenting belief in himself is something for which we should all probably strive ourselves. After meeting Mandel in the late-1990s (when he was hired as a writer on Mandel’s talk show at the time), Cohen sets out to become an entertainer… and Mandel, taken by his chutzpah, films him throughout the years thereafter. Every awkward audition, every awkward performance, every uncomfortable moment on Cohen’s long and winding road to… well, a modicum of fame as Mandel’s go-to schtick sidekick.

As a doc, the film is just okay. It’s an assemblage of Mandel’s accumulated footage and, at the post-film Q&A, the producers admitted that they began with mountains of videotapes and then tried to figure out how to craft a film from it. The result is a sort of extended home movie, but one whose underlying message is: make the effort, not the outcome, what matters. And, to his credit, Cohen is incredibly likeable, as evidenced by the number of audience members who congratulated him and took photos with him after the screening. 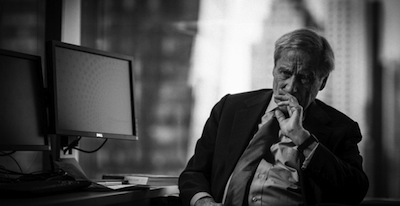 My next film was one that I selected simply because it fit nicely into a vacant window of time between two screenings, and it turned out to be an excellent choice. Attacking the Devil: Harold Evans and the Last Nazi War Crime (7/8) is an engrossing, meticulously constructed look at the titular journalist, renowned for his decades at the helm of The Sunday Times and, more specifically, his mission to get justice for the thousands of victims of Thalidomide (the oft-prescribed 1960s and ‘70s “sedative” for pregnant women that resulted in babies being born with devastating birth defects). From his early days at a small paper called The Northern Echo to his years running one of the most prestigious publications in the world, Evans never wavered or surrendered in his efforts, taking on not only the pharmaceutical company responsible, but the government and public pressure, as well. Combining Evans’ own recollections with interviews and archival footage, co-directors Jacqui and David Morris have crafted a wonderfully comprehensive look at his career, ethics and legacy through the filter of this particular story. (Btw, if – like me – you spend much of the movie wondering about its title, fear not: it’s explained in the doc’s final third.)

A small sidebar on between-film dining: I’m starting to feel like a competitive eater due to my increasing aptitude for consuming entire meals in 15 minutes or less. Moving on…

Much has been made of my third film. It won the Grand Jury Prize for documentary at this year’s Sundance Film Festival, so my expectations were high. Perhaps too high, because The Wolfpack (3/8) turned out to be a narratively scattered, frustrating doc that left me with more questions than answers, and never really delved very deeply into what seems like a pretty weird circumstance.

The six Angulo brothers, ranging in age from I-don’t-know-what to I-have-no-idea (because the film doesn’t reveal it – vaguely, they’re teenagers), have been raised in virtual seclusion in a Lower East Side housing project. They don’t go to school (they’re home-schooled by their mother, who comes off as having Stockholm Syndrome for much of the film), they rarely go outside, and they spend their days and nights engrossed in – and then recreating – Hollywood movies. Their father, who might (?) be an alcoholic (?) or a control freak (?) or abusive (?) or all of the above (?) keeps the family under close watch, refuses to work (because he believes capitalism is evil) and appears to be the only one free to come and go from the apartment. But things change when his sons start to get older and begin to question the rules they’ve lived under all their lives.

Throughout, I had questions: how is this family supporting themselves? Who’s who? The brothers are never identified individually by name onscreen, so I had no clue which one was which… making the post-film Q&A updates on their lives completely meaningless. What causes the sudden shift in the family dynamic, so that they go from cloistered to taking day trips (dad included!)? What’s the story with the mother’s family? She makes a call to her own mother at one point, to whom she hasn’t spoken in decades – why? And what comes of it? Do the brothers have any extended family? And so on and so on. Based on some of the questions posed (very politely) by some of my fellow audience members, I suspect I was not alone in my confusion and disappointment. Oh well. 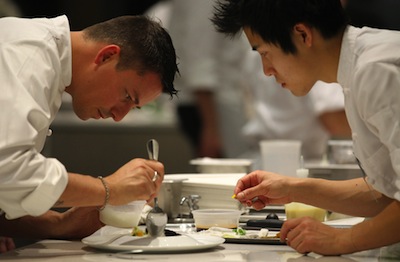 Last up was For Grace (5/8), which follows acclaimed chef Curtis Duffy as he attempts to realize a dream and open his own restaurant in Chicago. If you’re a fan of shows like Top Chef, this is sort of like a blown-out version of the “Restaurant Wars” challenge, wherein each piece of a restaurant puzzle – from the menu to what kind of table linens will be used – has to be decided. Only here, the journey to build Grace from the ground up is juxtaposed with Duffy’s own journey to (metaphorically) build himself back up after a family tragedy that happened years earlier. Interviews with assorted culinary experts, along with Duffy’s friends and younger sister, help paint a portrait of a determined young chef who’s able to compartmentalize his life enough to keep moving forward. Yet, while all that sounds wonderful, the resulting film – which boasts some hyper-gorgeous food-porn shots of Duffy’s elaborate creations – left me feeling just… fine. It was a good, solid doc, but it didn’t amaze in the same way its subject’s work apparently does.