With snacks packed and my screening schedule tucked into my knapsack (picking what to see and when literally took me a week!), it was time to get Hot Docs 2017 underway. 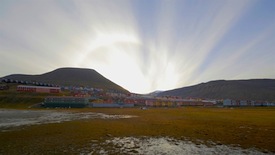 The first official day of the festival also turned out to be the warmest of the year so far, so – given my inherent dislike of heat and humidity – it only made sense to kick off my filmgoing with This Cold Life (7/8), a beautiful and lyrical film about the colourful residents of Longyearbyen, the northernmost town in the world, located in the archipelago of Svalbard, halfway been Norway and the North Pole. (Fun fact: Svalbard is also home to the World Seed Bank!) Director Darren Mann uses the breathtaking landscapes of this edge-of-the-Arctic location as the stunning canvas on which to paint the portraits of the hardy, quirky citizens who came from all over the world and chose to live in, quite literally, the middle of nowhere. From the thoughtful lone gatekeeper (and sole tour guide) in the now-deserted ghost-towny settlement of Pyramiden, to the Australian sled-dog breeder, flirty coal miner, eccentric restaurant owner and even the town’s pastor-turned-author, they’re all equally compelling. One of my fellow filmgoers put it best during the post-screening Q&A, when he told Mann (and I’m paraphrasing) that This Cold Life covered the full spectrum of emotion: humor, heart, melancholy, grief, despair and hope. It was a great way for me to begin the fest.

Day two got off to a rather rocky start at the Lightbox, where the box office lineups were inexplicably suuuuuuuuuuuuuper-slow. I had to wait almost 15 minutes in line for a media ticket – a process that, in all the years I’ve been going to Hot Docs, has taken maybe 15 seconds – and the folks in the same-day-purchase line (be they students, seniors, passholders or just film fans) fared even worse. The line snaked through the lobby to such an extent that the festival staffer running the venue (who’s awesome and who’s worked there every fest for the last several years) asked us all to squeeze in as close as we could because we were at risk of becoming a fire-safety violation. Later, I heard another filmgoer giving one of the other staffers an earful about the process. Thankfully, the logjam seemed to have cleared by the mid-afternoon. 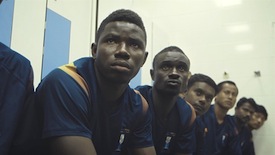 As anyone who’s read my previous festival (Hot Docs, TIFF, WWSFF, whichever) coverage knows: I love it when I stumble upon a great film completely by accident. That was the case with my first film today, director Adam Sobel’s The Workers Cup (7/8), which will no doubt make anyone who sees it look at major sporting events like the World Cup or the Olympics in a whole new way. The doc wasn’t on my to-see list, but I found myself with some extra time today, so I picked up a ticket… and it was excellent! With up-close-and-personal access, the film explores the lives of a handful of foreign migrant workers in Qatar – who represent some 1.6 million migrants hired to build the stadiums and infrastructure for the 2022 World Cup, which Qatar will host. Young, eager but almost immediately disillusioned upon arriving in Qatar, where their working conditions are essentially a form of modern-day slavery (they aren’t allowed to quit or leave their compound without permission from their employers, for starters), their only solace is on the soccer pitch, where they compete in the titular tournament on behalf of the grinning corporate overlords for whom they work.

Yet while the film is undeniably eye-opening in an unsettling and tragic way, there’s still hope in the hearts of these young guys, and that’s what saves it from being a feel-bad film. There is no preaching or condemnation on the part of the filmmakers, even though their message is crystal clear, delivered through (as Mann himself put it) the juxtapositions and the silences. No one needs to declare, “This situation is abhorrent! These workers are being exploited!” because it could not be more obvious just by watching.

Perhaps even more shocking was my second screening of the day. Filmed vérité style over the course of two years (2014-16), The Force (6/8) follows the Oakland Police Department as it attempts the apparently Herculean task of reforming itself. The entire department was placed under federal oversight in 2003 as a result of civil-right abuses and rampant officer misconduct, but it’s woefully clear in director Peter Nicks riveting years-in-the-life exposé that – despite multiple police chiefs and whatever idealistic rhetoric is fed to rookie cops fresh out of the academy – government intervention has done little to change or improve the force. Maintaining a somewhat neutral stance, the doc highlights the systemic corruption and cover-ups the current chief is trying desperately to undo and prevent, and officers are presented from all sides: as beleaguered peacekeepers, brutal enforcers and conflicted human beings. It affords the residents of Oakland the same courtesy; there are just as many victims as instigators, and equal numbers of concerned constituents as hard-line activists spouting things like, “There ARE no good cops.” There are genuine moments of suspense and peril, and, for the folks onscreen (especially Oakland mayor Libby Schaaf), the hits never stop coming. Just when you think it can’t get worse… it does. The Force may not be everyone’s cup of tea – there was an elderly couple sitting next to me who clearly weren’t prepared for some of the film’s revelations or occasionally graphic footage – but it’s a timely film about an undeniably hot-button issue in Oakland and many other cities in the U.S.