Day one of Hot Docs filmgoing! YAAAAY! I got to the Bader with plenty of time to spare, met up with my filmgoing pals and snagged my fave seat. 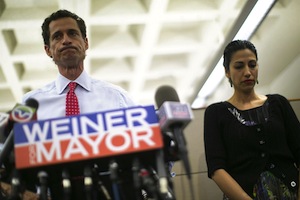 First up was Weiner (7/8), a behind-the- scandal glimpse at the life of former congressman Anthony Weiner as he attempts to run for the mayor’s office in New York City. Starting out as a doc (presumably) about the “reformed” Weiner’s newest pursuit of public office, the film is forced to switch gears when, midway through his campaign, brand new sexting allegations arise. And everything implodes. What results is a truly fascinating profile of a very smart, very charismatic guy for whom the adage “any publicity is good publicity” could not be more true. Co-directors Josh Kriegman and Elyse Steinberg get unprecedented access to Weiner and his long-suffering (but definitely no fool) wife Huma Abedin, whose right-hand- woman status alongside Hillary Clinton becomes increasingly jeopardized with each new mess Weiner finds himself in. And he finds himself in plenty… to the point that it becomes painfully obvious that, for him and to the detriment of his family, being famous and being infamous are seemingly interchangeable.

After a quick bite to eat, I made my way to Hart House for one of the must-see films on my 2016 roster. And I can honestly say that the whole experience might go down as one of my all-time favorites in all my years at Hot Docs. 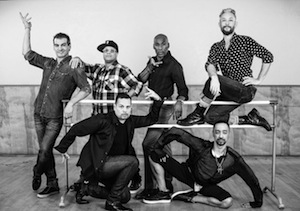 The film in question was Strike a Pose (8/8), an absolutely wonderful, moving, funny, insightful and ridiculously engaging doc about six of the dancers who shot to fame during Madonna’s “Blonde Ambition” tour and subsequent Truth or Dare documentary. Co-directors Ester Gould and Reijer Zwaan catch up with Carlton, Jose, Luis, Kevin, Oliver and Salim 25 years after the then-twentysomethings went from obscurity to superstardom. Each man, now in his 40s, reflects on the groundbreaking tour and what life on the road was like, and, in much greater detail, discusses how his life unfolded (and, in some cases, unraveled) once the tour ended. What was especially revealing was depth of honesty, pain, redemption and love these men have for their collective experience and each other. I fully ugly-cried a couple of times during the film, it was that powerful.

As great as the film was – and, based on the overwhelming, tear-filled standing ovation it received from the super-enthusiastic audience (every single one of whom stayed for the post- film Q&A, which is extreeeeemely rare) – its subjects were even more amazing.

Jose, Oliver and Kevin were all in attendance alongside Gould, and the reception they received was matched in genuine warmth and appreciation by the thanks they gave. They were all crying, as well! After the film, all three were beyond sweet and hugely gracious with every single fan (my moviegoing pals and me included) who wanted to share a story, take a photo, say hello or just get a hug. They stopped and talked with everyone who asked, and kept thanking us for our support over the years. As someone who was obsessed with the “Blonde Ambition” tour as a teenager, meeting – and hugging – these three guys was unreal, and I’m so grateful they made me love them even more as adults than I did when we were all basically kids. It was such a great night!