Sometimes, you have the best intentions when it comes to packing in as many documentaries as you can before the festival is over. But sometimes, your body has other plans. Such was the case with my upset stomach today, which meant I cut my three films down to two.

First up was Chasing Coral (8/8), a film I’d been looking forward to seeing since it was announced. I’m a HUGE fan of environmental documentaries, and always make a point of seeing as many as I can when they’re programmed at Hot Docs. And this one was, in a word, phenomenal. As is the case with so many films of this ilk, it was simultaneously breathtaking and heartbreaking.

Directed by Jeff Orloski (Chasing Ice), the doc examines the declining health and impending demise of the world’s coral reefs. 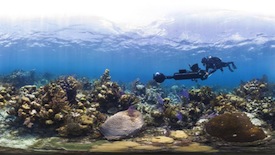 Shot all over the globe – with key studies in Hawaii and, most alarmingly, Australia’s Great Barrier Reef – the film features footage that’s astonishing on many levels, not the least of which is the accelerated rate at which coral is dying. Joined by self-proclaimed “coral nerd” Zack Rago and avid diver (and former ad exec) Richard Vevers, Orloski suits up and heads below the surface – literally and figuratively – to document this environmental catastrophe. And the result is a visually stunning, gorgeously shot look at some of the most exotic underwater life I’ve ever seen as it struggles to survive amid rising water temperatures. Orloski talks to multiple experts, who all sound the same alarm: this isn’t a drill, folks. Coral is dying and, if humans don’t smarten up and reduce their carbon emissions, it’ll all be toast within the next few decades. Chasing Coral is alarming but not alarmist, allowing the coral – which we literally watch wither and die onscreen – to speak for itself. And, as one of the folks in the film says (I’m paraphrasing), it’s saying, “Pay attention to me.”

I was literally a sobbing mess by the end of the film, it was that powerful. And much to my sheer delight, Orloski and Rago were both on hand for a post-film Q&A and then held court in the lobby to continue chatting with filmgoers thereafter. Had my eyes not been so red and puffy, I probably would have congratulated them both on my way out of the theater.

Instead, I hopped right back in line for Whitney: Can I Be Me? (5/8), director Nick Broomfield’s moving but uneven look at the rise and fall of Whitney Houston. Condemned by the Houston family, the film utilizes previously unseen footage 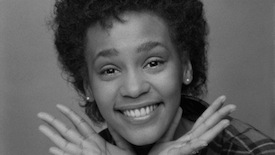 from a scrapped documentary by co-director Rudi Dozelal, and explores key aspects of the pop icon’s troubled life, including her drug use (which started in her youth), marriage to bad-boy Bobby Brown (which helped her earn some “street cred”), and long-time relationship with her best friend Robyn Crawford (which was clearly romantic but which was kept secret for all manner of reasons). While the doc successfully generates genuine sympathy and sadness for the mega-talented singer, whose insecurities lay at the root of virtually all her woes, it’s also an all-over-the-map, roundabout recap of things many of us already know. Can I Be Me jumps back and forth in time so much – it’s 1999! no, wait, now it’s 1992! then 2009! then 2002! then 1989! then 1992 again! – that the narrative threads wind up scrambled, and huge chunks of time are left out altogether. None of the most prominent figures in Houston’s life actually participate in the film (see above re: condemnation), and despite Broomfield’s very obvious desire to have the audience understand that Houston was gay and that hiding her relationship with Robyn was part of the reason she was so tormented, no one onscreen ever actually says those words. It’s as though everyone is still afraid to have it be known, lest it somehow “taint” Houston’s memory. As someone in the film says (and I’m paraphrasing), even though it was drug use that was killing her, being identified as a lesbian or bisexual was somehow considered worse and therefore even more vigorously covered up. Such a shame.

Tomorrow is the last day of the festival, and I’m hoping to get to three films. Fingers crossed my stomach cooperates!