I’m not sure if it’s just that I somehow managed to attend pre-fest screenings for only the really great docs, or if the caliber of films I’ve seen so far is actually an indicator that Hot Docs 2017 is going to be overflowing with exceptional offerings, but here are more of the titles that impressed, intrigued or excited me so far. 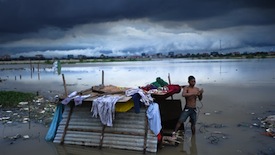 This powerful doc was headed for seven slices… until the last five minutes. Set in the titular country, the film follows the efforts of various lands-right activists – from villagers to a Buddhist monk – as they battle their government for title to the land on which they live. Unfortunately for them, there’s more money in corruption than proper democracy, so demolishing their homes in favor of development (and profit) is the approach of choice for the Prime Minister. Equally upsetting and moving, the doc seems to have finished filming in 2014 or 2015 (?), but it  leaves the audience with something of a cliffhanger ending, which I found frustrating. For anyone like me, who didn’t follow the news at the time and isn’t aware of the outcome, there’s no update on the fates of the various individuals featured in the film. I actually thought there would be more… and then the closing credits rolled. Meep! That missing info was really my only issue with the otherwise excellent film. 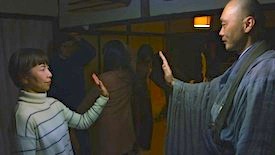 It’s fitting that the subject of this cinematic meditation on death and suicide is a Zen monk, because the whole film possesses a Zen-like calm despite the emotional chaos quietly unfolding on screen. A former Japanese wild child, the doc’s subject has reformed and taken to counseling innumerable troubled souls who are contemplating suicide. He gets calls all day and night, his physical health is in decline (he smokes, drinks, doesn’t exercise), and his emotional health is taking a beating due to the suffering he absorbs from his counselees… yet he persists. It’s an insightful portrait of an individual perhaps attempting to better understand his own life while trying to save those intent on ending their own. The doc also opens and closes with the same contemplative exercise, reinforcing the idea that the process is as much for the monk as for those he is teaching. 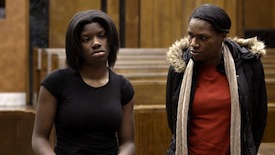 What happens when you’re a pregnant teenager with anger-management issues, who’s stuck in a cycle of poverty, crime and violence in St. Louis, Missouri? That’s the focus of this documentary, the subject of which is a girl nicknamed Boonie, who’s been bounced from her high school for fighting and sent to an alternative school… where she strikes up a romance with a fellow student and subsequently winds up pregnant. Tracking several years in Boonie’s troubled life, the film paints a fairly bleak portrait of a petulant teenager who’s at risk of succumbing to her situation, but still manages to infuse the proceedings with a few key glimmers of hope: Boonie’s frustrated mom, the stern-but-fair judge/principal trying to guide his district’s youth towards bettering themselves… and, ultimately, Boonie herself, who seems determined to change for the sake of her son.

Comparisons will inevitably be drawn to other similar projects in recent memory (Making a Murderer, anyone?), but my lone criticism of this true-crime doc is that it blows its proverbial wad far too soon in the film – almost immediately, in fact. (Even the official Hot Doc synopsis kind of gives it all away.) As a result, the audience pretty much knows the score early on, eliminating what might otherwise have been a gripping whodunit (or howdunit or whydunit), and it would have been more fun for me to be strung along a little further. Still, the resulting doc – which tells the tale of Gypsy Rose Blancharde, a seemingly paralyzed, ailment-stricken teen accused of conspiring to murder her own mother – makes for some riveting viewing, not so much because of the how or why, but because of the who (or, rather, whos) behind the killing. 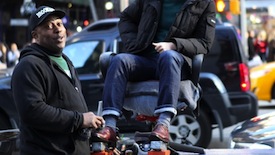 Director Stacey Tenenbaum’s look at the art of shining shoes, and the wildly colourful individuals who practice this unrecognized craft in cities around the world, is charming, eye-opening (who knew shiners in Bolivia wear balaclavas to conceal their identities because their profession invites discrimination?) and pretty delightful. Walking the proverbial mile in the shoes of various shiners in New York, Toronto, Sarajevo, Tokyo and La Paz, Tenenbaum delves into what makes these folks tick and why they do what they do. Though not every subject is equally compelling – quick-as-a-whip Don in New York outshines (pun intended) the others, and could easily have had a documentary all his own – they all share their unlikely roads to the shoeshine box, serving as an effective reminder never to make assumptions about anyone foolishly perceived as a “menial worker.”