I’ve been film festival-ing for many years, but as I get older I’m finding it less and less appealing to schedule myself for four- or five-screening days – I like my sleep, and I like eating proper meals at reasonable intervals. That said, I still try to squeeze in at least one four-film day at Hot Docs, and yesterday was that day!

First up was Mercury 13 (8/8), which I actually hadn’t realized had already dropped on Netflix last week. Dur. Nonetheless, the inspirational, empowering and terrifically made doc

– about the titular group of pioneering American women pilots, who trained to be the first women astronauts but who, in the end, were denied the opportunity by NASA in the 1960s – was a wonderful way to start the day. I already had a working knowledge of the WASPs (Women Airforce Service Pilots), who flew transport missions during WWII, but I knew precious little about the Mercury 13, and this film filled my heart and brain with their fascinating stories. Archival footage and present-day interviews with the 13’s surviving members, as well as with Eileen Collins (who, some 30+ years after the Mercury 13, became the first woman to command a NASA mission), reveal the prejudice and patriarchy that prevented these skilled women pilots from pursuing their dreams and making history.

After a quick lunch under the Lightbox lobby stairs, I hopped into line for my weirdly thematically appropriate next film, director Maya Gallus’ The Heat: A Kitchen (R)evolution (5/8), which – like Mercury 13 – profiles a number of talented women fighting the patriarchy in their chosen field. 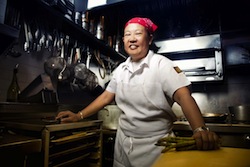 This time, though, it’s the culinary world, where male chefs have long held center stage while their equally gifted female contemporaries are often left to excel in the wings with far less fanfare. Included in the film are: NYC chefs Anita Lo, Amanda Cohen and Victoria Blamey; Paris chef Anne-Sophie Pic; London chef Angela Harnett; and Toronto chefs Suzanne Barr and Charlotte Langley. Food writer Ivy Knight is also thrown into the mix to provide insight into the industry. But the resulting film feels a little scattered and uneven, and might be a case of too many cooks in the kitchen (pun very much intended). The narrative jumps around from topic to topic but not in a smooth or meaningful way, I wasn’t entirely sure how or why some of the chefs were chosen, and Knight’s presence feels tacked on in an awkward way (despite her contribution of a harrowing tale that reveals just how problematic the unapologetically-macho kitchen culture can be). It was fine, but not great.

Speaking of not great, Ubiquity (3/8) was super-disappointing. Completely devoid of science or psychology or insight or evidence, the film is hollow and very reminiscent of The Quiet Zone, which I saw at Hot Docs 2017 and which was equally meh.

Ubiquity introduces audiences to three people suffering from electromagnetic hypersensitivity – basically, they have physiological responses (headaches, rashes, trouble functioning) in the presence of electricity, Wi-Fi, cell phones, computers, microwaves and most of the technology and devices you’d find in any given developed city or town in the world. Problem is, the entire film consists solely of these three people telling us (in some cases, a bit unconvincingly) about their ailments. Over and over again. Yet two of them seem to function quite normally when they’re focused on something other than repeatedly measuring electromagnetism with their omnipresent handheld monitoring devices. (If you’ve ever watched Better Call Saul, this is what Chuck McGill claimed to have!)

And I’m not sure whether the filmmakers set out to have their subjects appear mentally ill, but that was the (possibly unintentional) result. Without any kind of science- or medicine-based evidence to support or refute their claims (the subjects mention “studies,” but none of those studies are ever introduced, explained or even properly cited), these three individuals just look like they’re unbalanced. I’m sure the symptoms they’re having are real, but are they legit caused by electromagnetic waves? Or are they a physical manifestation of deeply rooted psychological beliefs? Who knows. The film doesn’t weigh in one way or the other.

Last up was Circles (6/8), which wins the award (so far) for Most Enthusiastic Production Team at a Hot Docs Screening. Before the ticketholders line had even been let into the theater, and then again once we were seated and waiting for the screening to start, multiple enthusiastic reps for the film (including director Cassidy Friedman’s dad – aww!) were working the crowd, soliciting email addresses from audience members (“so you can keep up with what’s going on with the film”) and inviting people to an open forum discussion on Sunday. While the latter sort of makes sense, it felt a bit premature to ask people to sign up for eblasts on a film they hadn’t yet seen – I mean, what if they wound up hating the movie?

Thankfully, I would hope hating Circles would be a really hard thing to do, since its central figure – dedicated, hard-working Oakland, Calif., high-school counselor Eric Butler – is so awesome.

Working at a school to which other schools send their “bad kids,” Butler has his super-stressful work cut out for him: trying to steer troubled teens

in the right direction while pressures from peers, family and circumstance work to pull them away. Tracking Butler over a couple of years, the film showcases his restorative-reform program, which uses frank mediation and discussion to (hopefully) get these kids out of trouble and onwards to better things, and his relationship with his own teenaged son, Tré. And while the school-set sequences are strong and compelling, the parallel storyline involving Tré doesn’t quite work as well. In some instances, it was also hard to figure out where we were in time or how much of it had passed – Tré’s hair goes from short to long to short to long, which made me question whether the narrative was being manipulated a bit to create the desired arc (i.e., good kid –> troubled kid –> good kid). But that’s a minor criticism about an otherwise solid debut feature. 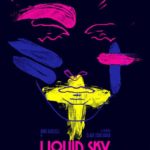