Every year at Hot Docs, there are films that share similar themes, and in the past I’d sometimes wind up seeing them in the same day completely by chance. This year, the fest streaming titles for viewing at home, available whenever you want to watch, means I can choose to watch similarly themed films together, back-to-back, which was the case with today’s titles. Though they weren’t equally successful and I enjoyed one more than the other, they shared the same sensibility and, in some ways, style, and made for a fitting double bill. 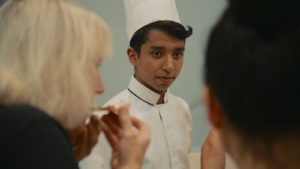 The idea of all-inclusive resorts has always been incredibly unappealing to me, and the bloated, sunburned, obnoxious guests in director Volkan Üce’s profile of two resort staffers didn’t do anything to change my mind. The film follows 25-year-old Hakan (who looks a lot older) and 18-year-old Ismail (who looks 14) over the course of a summer-vacation season at a super-swanky beachside hotel on the Turkish Riviera. Hakan is an introvert with social anxiety, who loves philosophy and takes the job to improve his English so he can move to the U.S. to “make movies”; Ismail signs on to follow in his older brother’s footsteps and earn money to support the family. Both are working class, both come from small villages, both get assigned to their respective posts, and both perform their jobs – Hakan operates the tube slide at the pool, and Ismail is a cook. Unfortunately, not a lot actually happens in the film, which felt like it never quite delivered on its promise. Early on in the film, the HR boss tells Ismail to take a photo of himself on day one and then another on his last day to see how much he’ll have changed, which sets up the expectation for the viewer that, aha!, this working experience will somehow be transformative for him and for Hakan. But… not so much. There are numerous scenes of the guys at work and talking (about life, about work, about girls, about English) with other resort staff, and a sprinkling of contemplative moments or interactions with guests, but as the summer and the film drew to a close, I wasn’t entirely sure what I was meant to have gleaned. 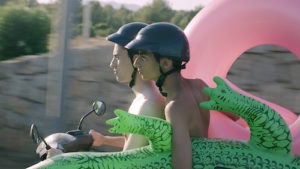 Let me preface this review by saying that, normally, I am not a fan of docudramas or, worse, “documentaries” that turn out to be more narrative fiction than fact. But director Miguel Ángel Blanca’s ethereal hybrid won me over… once I realized that, yes, portions of the film were staged and that the point was to purposely (and obviously) blur the lines between fantasy and reality. With a subtly sinister undertone and a creepy score/soundtrack that includes über-chilling whisper-singing by children (whisper-singing! meep!), the doc examines what life is like for various residents of Magaluf, a small beach town in Mallorca, Spain, that devolves into the ninth circle of spring-break Hell every summer when it’s descended upon by hundreds of thousands of horribly drunken, boorish, hyper-horny young Brits. Booze, pee, vomit and sex fill the streets and the sand, and the locals — including a wannabe actor/model yearning to rob an unconscious tourist, an ambitious city planner looking to reimagine the area, and an ailing widow who takes in a young boarder for income and company — have to figure out how to survive amid the non-stop debauchery. Seamlessly weaving staged scenes with voyeuristic documentary footage and a recurring theme of life/death/ghosts, Blanca creates a dark, otherworldly character study of a place rather than a person. Watching, I was often not quite sure what was real and what was manufactured, but I found myself riveted by the doc’s hazy dreamlike quality and the quartet of colourful central subjects, who each felt like a documentarian’s wish come true.