Though this was only my second day of TIFFing, it was the fourth day of the festival, and I’d been hearing a few accounts of ticketing snafus at the various venues, movies starting up to an hour late and general unpleasantness when arriving for screenings. My day-one experience at the Bader had been pretty close to ideal – the line was let into the theatre nice and early, and the screening started right on time – so I wondered whether I’d experienced the exception or the rule. On Sunday, I got my answer.

I arrived at the Scotiabank to sheer chaos. Line-ups had been crammed into every available space because the fest is using the venue for many of the press & industry screenings, so it was insanely crowded and loud almost as soon as I walked through the doors… and certainly by the time I landed at the top of the escalator. There were no orange-shirted volunteers to be seen ANYWHERE, which was bizarre – usually, there are so many of them that dozens have nothing to do but stand around waiting to offer assistance to confused filmgoers and visiting industry folk. For the first time, I had no idea where my line was. Without anyone to ask, I took to finding the start of each line-up and checking the placard – “cinema 5 ticket holders,” “cinema2 ticket holders,” etc. – and hoping I’d eventually locate my line and discover it to be blissfully short.

No one from the fest or the venue updated us on why we were being held in line despite being the first screening of the day, and I could tell people were getting increasingly restless with each passing minute. They FINALLY opened the doors EIGHT MINUTES before the scheduled start time of the film. We all filed in as quickly as we could, but the screening started 15 minutes late anyway. 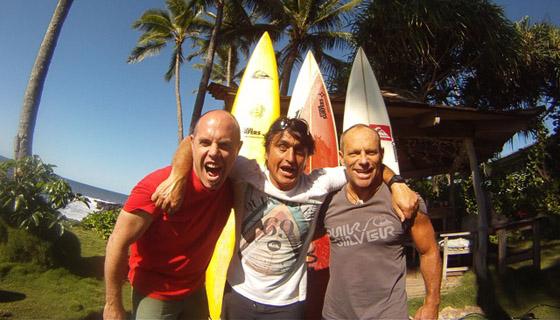 Storm Surfers 3D (5/8) had been one of two must-see titles for me at this year’s TIFF. I lurrrrrrrrrrve surf documentaries, so seeing a brand new one up on a big screen was a no-brainer. And, even though I kind of loathe 3D, I was willing to make an exception for this documentary about Australian surfers Tom Carroll and Ross Clarke-Jones seeking out previously unsurfed – and potentially life-ending – waves. In the film, the jovial pair (adrenaline junkies and perpetual teenagers both) crave bigger and better waves… especially those generated by offshore storms during Australia’s winter months. So, where the huge swells go, these buddies – and the camera crew – follow.

Directors Christopher Nelius and Justin McMillan track Carroll and Jones on several expeditions, and chronicle the duo’s preparations as they ready themselves and their team for their often dangerous expeditions. Yet, after a while, the proceedings started to repetitive and the impact of each new wave (pun intended) started to become less awe-inspiring. As well, unfortunately, the 3D aspect also made a lot of the action really tough to follow, and much of the jaw-droppingness of it all was obscured by the very technology meant to enhance it.

As I’ve mentioned in multiple reviews of 3D films, the glasses already darken the images on the screen – add to that the splashes of water or wave mist in the foreground and you wind up with a dizzying and disorienting effect, not a special one. I’m not sure why this film needed to be in 3D, as it would have been just as impressive, if not more so, in two ordinary dimensions. As a result, while it was certainly enjoyable, Storm Surfers 3D didn’t wow me as much as I’d hoped it would.