One of my festgoing pals had been reading my reviews of Hot Docs 2021 films and remarked that it sounded like everything I was watching was fantastic. “Oh, it has been,” I replied. “And then I watched Viral.” Look, I’m not a fan of the need to share every waking minute of one’s life on social media, or to anchor one’s personal validation in viewer counts and how many times someone “smashes that SUBSCRIBE button!” – it all leaves an unpleasant, narcissistic “me me me me” taste in my mouth. So, I will fully admit that I’m very clearly not the target audience for this film, but I’m also not entirely sure who is. 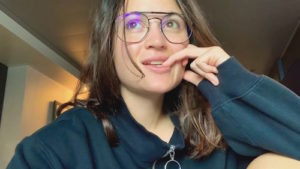 Directed by Udi Nir and Sagi Bornstein, Viral (2/8) is (essentially) a crowd-sourced compilation doc that follows seven twentysomething YouTubers from around the world over the course of 2020, which they collectively begin with high hopes and big dreams – sail the high seas! move to Paris! road trip through Europe! launch a cosmetics brand! – only to have the proverbial rug pulled out from under them when COVID strikes and the planet effectively closes up shop. Problem is, the entire film is clips culled from these YouTubers’ channels… and none of them are particularly interesting or have anything profound, shocking or insightful to share.

The film is basically a really long, fairly uninteresting highlights reel, with clip after clip after clip of the YouTubers just… talking to the camera. About themselves. Sharing their feelings: they’re bored, the streets are empty, life is hard. And, as they do, onscreen tickers update the numbers as their follower counts steadily grow. But WHY do they grow? What’s so amazing about these videos? The subject matter? The locations? The commentary? All or none of the above? It’s never explored or made clear. So, how and why were these seven individuals selected for the film out of the millions of YouTubers out there? Having watched the entire thing, I genuinely don’t know. There isn’t anything revelatory to be gleaned from what they say or shoot, nor anything we as an audience haven’t seen or heard or read or witnessed or experienced ourselves over the past 12 months. I will give credit to the filmmakers and their editing team, though, because the task of sorting through allllllll these creators’ content to cobble together some kind of narrative was likely herculean, but the entire project just fell flat for me.