I Capture the Castle

Like life, I Capture the Castle is complicated and full of nuances.
By Jenniferon July 25, 2014
0 Comments
Our Rating 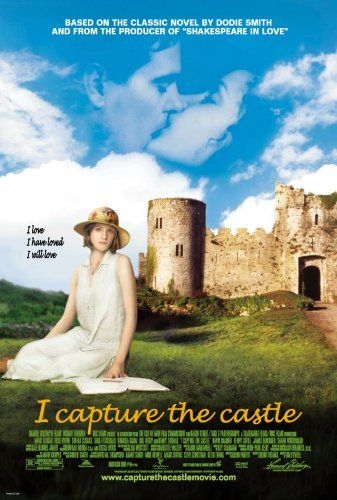 When a beloved book is made into a movie, I always anticipate it with a mixture of trepidation and excitement. Part of me thinks, “What could be better than a favorite story in movie form?” The other part of me recalls with horror just how many excellent books have been butchered into really awful movies. Even if the filmmakers don’t deviate from the original plot, things often just don’t look the way you imagined them as you read—Oompa Loompas with orange skin and green hair, and Jim Carrey as Count Olaf come immediately to mind. I Capture The Castle is one of those rare movies that is absolutely faithful to both the plot and the feel of the book.

With the opening line “I write this sitting in the kitchen sink” we are transported into the world of Cassandra Mortmain (played by Dirty Dancing: Havana Nights‘ Romola Garai). Cassandra is the teenage daughter of an eccentric has-been writer (Bill Nighy), and actually resides in a run down castle. The other inhabitants include her melodramatic sister Rose (Rose Byrne), precocious brother Thomas, stepmother and occasional nudist Topaz (Tara Fitzgerald), and very attractive household hand Stephen (Henry Cavill). The Mortmains have been living rent free for several years, existing solely on the advances of their father’s publisher. When the advances for a book that will never be written finally dry up, the Mortmains find themselves in a bit of a desperate situation. With scant money for food, and the prospect of never having new clothes again, the girls begin to lament their bleak future. Rose wonders how she will ever meet a suitable man in this situation, and feels destined to die an old maid.

Everything changes with the arrival of the Cottons, the owners of the castle and the property next door. The immediate threat is that they will demand rent, but the handsome sons Neil (Marc Blucas) and Simon (Henry Thomas) take a liking to this eccentric lot, and the two families soon become intertwined. Stephen loves Cassandra, but Cassandra loves Simon, Simon loves Rose, but Rose is both finicky and willing to marry anything that breathes. Mr. Mortmain begins meeting Mrs. Cotton quite frequently to discuss his work. Topaz, a former artist’s model begins posing nude again when she begins to feel unneeded by Mr. Mortmain. Stephen begins modelling for/shagging the vile Mrs. Fox-Cotton in order to earn money to impress Cassandra. A web more akin to a love-pentagon than a love-triangle begins to form. The story proceeds with equal measures of humor, heartbreak, and poignancy. The characters are wonderfully frustrating, and therefore seem real, as does the ending, which does not tie things up in an unrealistically tidy manner. Like life, I Capture the Castle is complicated and full of nuances.

With the exceptions of Henry Thomas as Simon and Tara Fitzgerald as Topaz, the characters are perfectly cast, right down to the dog. Henry Thomas is slightly wooden even for a prim Englishman, and I always find myself searching for that glimmer of Elliot from E.T. in him. Somehow he seems to have lost all the passion he conveyed as a child actor. Tara Fitzgerald did a fine job as Topaz, but simply did not look like the character described in the book. Topaz is a free-spirited, ethereal beauty, whereas Tara Fitzgerald has the quality of a wacky antique shop owner. However, such paltry complaints can be overlooked in what is otherwise a remarkably well-done film.