Sky Captain and the World of Tomorrow

As action-adventure pulp fiction comics and books were meant as pure entertainment, Sky Captain succeeds in the same way.
By Lindaon July 25, 2014
0 Comments
Our Rating 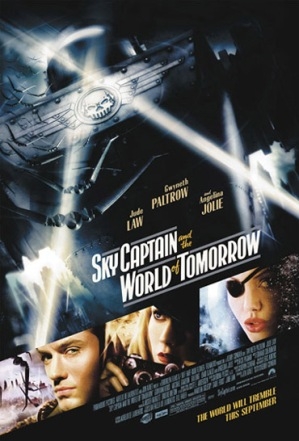 There has been so much fuss about how Sky Captain was made, that you go into the film with pre-set expectations. We have all seen CGI animation in film, from The Hulk (crappy), to The Phantom Menace (from crappy—think JarJar—to acceptable), to Lord of the Rings (fantastic). But CGI is normally used to create fantastic monsters and sci-fi landscapes. What is so unique about Sky Captain and the World of Tomorrow, is that its 100% CGI backgrounds (all the images, except for the actors themselves, were created on computer), look incredibly old-fashioned, while still being the stuff of fantasy.

Sky Captain is straight out of mid-20th-century comic books. With a look that is art deco, combined with the stylized shadows of film noir, topped off with pulp-fiction sci-fi, it truly looks fantastic. The story takes place in 1939, with the opening scene showing a zeppelin docking atop the Empire State Building in a snowstorm. You just know that director Kerry Conran, who apparently spawned the idea for the film by working laboriously for YEARS on a Mac computer, looked at what he created and said, “Cooooooool.” And you know what? The audience will agree.

As film stars of the past seemed much prettier than today, who better to star in an action-adventure yarn than gorgeously handsome Jude Law (as the flying ace Sky Captain) and classically pretty Gwyneth Paltrow (as plucky journalist Polly Perkins). Of course Polly and this hero-for-hire have a past, and of course their bickering stokes fires that have never quite gone out. When Polly is in the midst of a mysterious giant-robot invasion (think Iron Giant) of the un-named metropolis, who, but Sky Captain is called to save the world? And Polly, being the reporter that she is, hitches a ride with her old flame to find out just WHO is behind all this!

The plot, as in the best serial adventures, goes from one action scene to another. It doesn’t really matter what the storyline is, but it involves something about disappearing scientists, secret knowledge, and the inevitable end of the world. But then don’t most action/adventure plots? Giovanni Ribisi has fun keeping a completely straight face as Dex, a sort of technological-wizard sidekick to Sky Captain. And Angelina Jolie, despite her high-billing in the credits, only shows up briefly about an hour into the film as the leader of an amphibious squadron of soldiers. She sports not only and eyepatch and a British accent, Angie fans, but a sleek military costume as well. And finally, in one of the more unexpected cameos of the year, is Sir Laurence Olivier, whom you probably don’t need to be reminded, is actually dead. But there he is! His incorporated footage is one of those feats that will have film buffs scratching their heads and digging through their obscure video collections.

As action-adventure pulp fiction comics and books were meant as pure entertainment, Sky Captain succeeds in the same way. There are many things in this film that will make you think of other movies (anything from King Kong, to Raiders of the Lost Ark, to The Wizard of Oz). But the truth is, despite the, well, cartoonish plot, and glossy 2-D characters, I found myself completely entertained. Sky Captain and the World of Tomorrow is a popcorn flick in the best sense, and never pretends to be anything other than that.