I’m not sure what to make of Idlewild. It sat on a studio shelf for a long while and, now that it’s been released, I can kind of see why.
By Vickieon December 27, 2014
0 Comments
Our Rating 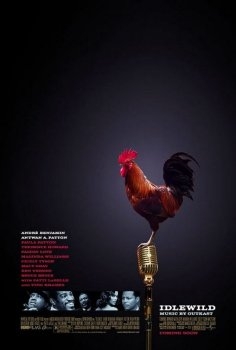 It’s not that the movie is bad, because it isn’t. In fact, it’s quite ambitious and somewhat enjoyable. But it does try to cram in so many different genres that it feels a bit like a glitzy, bouncy, colorful mess.

André “André 3000” Benjamin and Antwan “Big Boi” Patton co-star as longtime best friends, Percival and Rooster. The guys have known each other since they were knee-high to a grasshopper and, as adults, have found themselves living vastly different lives in the Prohibition-era South. Percival is a soft-spoken, mild-mannered piano player who works in the mortuary alongside his morose father (Ben Vereen) by day, and tickles the ivories at Rooster’s bawdy nightclub once the sun sets. Rooster, meanwhile, is married with kids, but also a rampant cheater and oft-screwed (literally and figuratively) rum-runner. Things get complicated for the pair when two new faces roll onto the scene: drop-dead gorgeous chanteuse Angel (Paula Patton), and quiet but frightfully menacing crimelord Trumpy (Terrence Howard). Percival immediately becomes Angel’s confidante and collaborator, dreaming of a life beyond the confines of Idlewild, while Rooster finds himself trapped under Trumpy’s Mafia-like thumb pretty much from the get-go and desperately looking for a way out of his dilemma.

Filled with raucous musical numbers and more than a few completely inexplicable interludes where people randomly start singing (Percival is serenaded by his cuckoo clocks?), the film is certainly pretty to look at and relatively fun to watch. Both Benjamin and Patton prove themselves to be decent acting talents, and it doesn’t hurt that they’ve surrounded themselves with heavyweights (including Vereen, Ving Rhames, Cicely Tyson and Patti LaBelle) in that regard. Writer-director Bryan Barber is a veteran of the music-video industry, and his skill at creating a certain “look” is more than evident. The visual style of the film is distinct, and many of the sequences could very easily be shown on MTV as individual vignettes.

But what the film lacks is cohesion. It bounces back and forth between period musical, light comedy, gangster flick, action drama and absurdist nuttiness. Rooster, for example, often seeks guidance from his talking hip flask. (Admittedly, the flask is quite the clever little guy.)  As a result, it was hard to get a handle on the tone, and the core of the story was never clear – is it a movie about the two friends and their decades-long friendship? or is it a movie about the occasional wackiness of life in this small town? or is it a movie about the perils of dancing with the devil (in this case, Terrence Howard and his scary gun)?

I struggled for a while over how to rate this movie. I considered giving it four slices based on its choppy structure and all-over-the-place-iness, but figured that I left the theater smiling, so one more slice was probably in order.