The movie wants to be exciting and thrilling, but instead it’s formulaic and unimaginative. 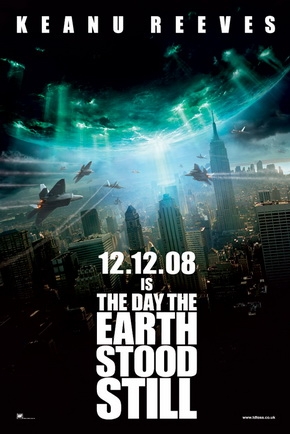 Expensive, explosive and effects-driven, The Day the Earth Stood Still has all the trademarks of a high-concept summer release… which is to say it’s not particularly interested in telling a great story or featuring compelling performances, but it sure does want to go big or go home.

Based on the 1951 sci-fi classic of the same name, this remake stars Keanu Reeves as Klaatu, a monotone and rather morose alien, who arrives on Earth amid much pomp and circumstance and a humungous glowing orb of what looks like gas with a monolithic metal guardian that shoots laser beams from its eyes. He’s “a friend of the Earth,” Klaatu explains, and wants to chat with the leaders of the planet about something important. Too bad U.S. Secretary of Defense Regina Jackson (Kathy Bates) decides she’s the boss of the world and puts the kibosh on that idea. She worries that Klaatu has hostile intentions, and she wants him in custody and interrogated.

But curious and kindly scientist Helen Benson (Jennifer Connelly, in yet another token-smart-lady role) senses something benevolent about Klaatu, and befriends the boring extraterrestrial… who gradually reveals the real reason for his arrival (hint: he’s clever with phrasing) and the duo flee government officials with Helen’s annoying young son (Jaden Smith) in tow.

While the special effects are impressive, and the story sounds like it could be fun, the execution is kind of half-hearted. The movie wants to be exciting and thrilling, but instead it’s formulaic and unimaginative. It’s essentially one long chase sequence devoid of surprises, and the fate of its characters is never really in question. The script is fairly light on dialogue, but what dialogue there is sounds like it fell out of a B-movie. I won’t lie: I snickered more than once. Character development? Not so much. I realize that’s not key in a movie like this, I would like a tiny bit just to keep me engaged.

In terms of the cast, Reeves is flat, Smith is highly irritating and even Connelly seems like she’s phoning it in. And poor Jon Hamm and John Cleese are relegated to thankless and curiously random supporting roles as, respectively, a government official and a reclusive Nobel-Prize winner. Bummer for them and for us.

All that said, TDTESS is a decent enough popcorn film. It’s fluffy and easy to digest, and it doesn’t really demand much from its audience. It also boasts a subtle-as-an-anvil environmental message that nonetheless earns it at least one brownie point for trying (however awkwardly) to be ecologically enlightening and globally responsible.