War for the Planet of the Apes

Ahh, at last. The third film in the apes vs. humans story trilogy finally strikes the right chord between jaw-dropping effects, intricate battle sequences and rich narrative to deliver a moving story that’s more poignant than pugilistic, but still packs enough punch that action fans will be more than satisfied.
By Vickieon January 27, 2018
0 Comments
Our Rating 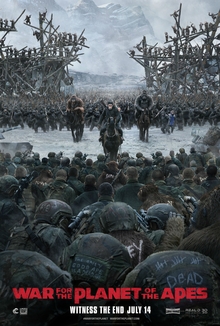 With a distinct “Moses leading the Israelites” vibe seeming to guide the proceedings, the film finds our simian hero, Caesar (Andy Serkis), preparing his ever-dwindling clan of apes for an epic journey to a new home after their current hideaway is discovered – and swiftly destroyed – by militant military types led by a ruthless ape-hater known only as “the Colonel” (Woody Harrelson). During the apes’ exodus, they stumble upon a young mute girl (Amiah Miller), whom they decide to take along with them, and later encounter a nervous chimp calling himself “Bad Ape” (voiced by Steve Zahn), who also join their ranks.

But the Colonel is having none of this journey-to-safety nonsense, and is fiercely intent, capturing, enslaving and ultimately exterminating Caesar and his crew. The two sides in the ongoing apes vs. human battle each lay out their plans, but everything changes after Caesar finds himself captured and imprisoned, with his friends literally stuck on the outside looking in.

The actual story in War moves somewhat slowly and methodically, but nonetheless very effectively. There’s (comparatively) more stillness here; the blinding frenzy and dizzying chaos of battle is dialed down a bit in this installment, with those explosions of action serving to punctuate – rather than drive – the narrative this time around. In other words, unlike Dawn of the Planet of the Apes, this film has a somewhat more contemplative vibe, as Caesar spends a goodly amount of time reflecting on the past and considering his future. The wall-to-wall fighting and rage have given way to the apes perhaps becoming more human-like than ever before, grappling with such issues as revenge, remorse and retribution.

And in watching them onscreen, it really does become hard to remember that they’re actually CGI creations and not real beings. I don’t see Andy Serkis, I see Caesar, and for the most part I have no clue which actors played which apes (though, Karin Konoval deserves a special nod for her portrayal of gentle, nuanced orangutan Maurice). Technology has advanced to such a degree that the line between reality and that which is digitally created is absolutely seamless, and the effects in War are astonishingly great.

There is some scenery chewing to be had on the part of Harrelson’s Colonel, and his character arc deflates as the movie goes on (perhaps in a bid to make him less of a cartoon-worthy villain). But it’s a relatively small criticism in what is otherwise a satisfying conclusion to the saga of Caesar and friends.