Have you ever sat down to watch someone else do calculus for two hours? No? Well, sitting through Inferno delivers a fairly comparable experience.

Because nothing says “fun time at the movies!” like watching professor of iconology Robert Langdon (Tom Hanks) scramble, sweaty and bloated, from one architecturally stunning location to another, solving completely bewildering, indecipherable “puzzles” – all on his own and, this time, all relating to Dante – over and over again as he goes. 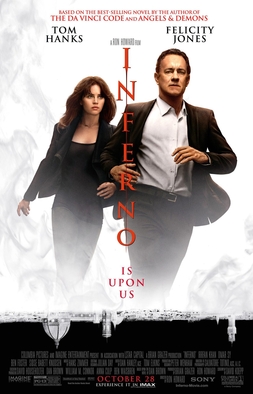 Exhausting and not especially engaging, Inferno is yet another installment in the series of big-screen adaptations of the novels by Dan Brown. This time around, Langdon teams with a young doctor named Sienna Brooks (Felicity Jones) to prevent a deadly virus from being released on humanity. The pathogen is the work of a recently deceased “madman” (Ben Foster), whose argument is that the only way to reset the planet and thwart surging global overpopulation is to, well, sacrifice half the people of Earth for the good of the world as a whole. [Note to filmmakers: if you want the audience to sympathize with your hero and not your purported villain, perhaps don’t make the villain’s argument so seemingly sensible that the audience goes, “You know what? He makes a solid point.”]

As Langdon and his let’s-appeal-to-the-Millennials new young sidekick globetrot, they find themselves in all manner of peril, simultaneously pursued by: 1. a mysterious agent of the World Health Organization (Omar Sy), who may or may not want to kill them; 2. a less-mysterious agent of the World Health Organization (Sidse Babett Knudsen), who doesn’t seem like she wants to kill them but nonetheless appears to have nefarious intentions; and 3. a mysterious but highly entertaining security-firm exec (the always excellent Irrfan Khan, who earned this film two of its three slices), who totally has nefarious intentions and basically kills anyone who gets in his way.

The film opens with a fairly significant need to suspend one’s disbelief, and quickly devolves into one scene after another of Langdon chasing down clues and sputtering out expositions – I mean, solutions – that no one in the audience would ever be able to understand, let alone figure out.

“This means we have to get to THERE!”

“That means the answer is HERE!”

When it comes to mysteries on film, half the fun for audiences is trying to solve the mystery before the characters onscreen do. Or, at the very least, to glean enough from what’s going on that they might venture an educated guess. Here, that’s completely impossible. Good luck figuring out what any of the clues or puzzles Langdon finds/deciphers are or mean, or what significance any of the points on his convoluted journey are. Or, for that matter, maintaining any sort of investment in the outcome of his mission.

Hanks is just not a compelling action lead, and unfortunately has very little chemistry with Jones. The supporting cast is stronger – Foster and Khan are both great – but their characters are not enough to salvage the narrative.

As a result, Inferno plods along and feels like a film only PhD students who wrote their theses on Dante would enjoy. And, about halfway through, I started rooting for the virus.