I laughed. I cried. I relived my childhood. 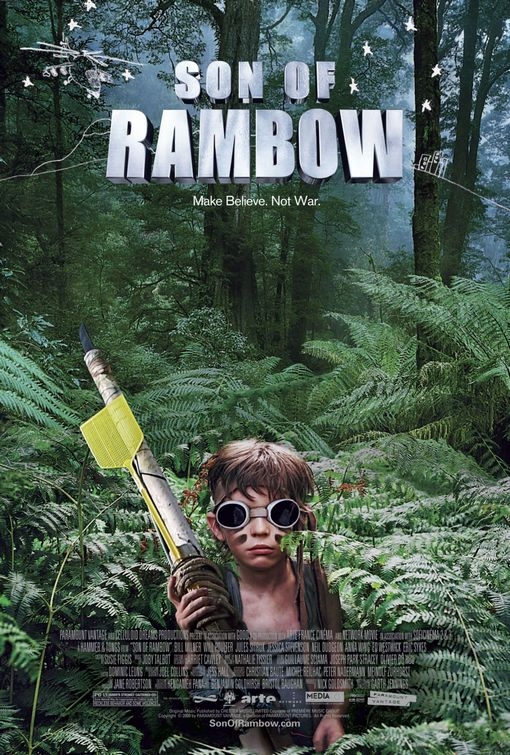 Son of Rambow is the most exhilarating, heart-wrenching, and surprising little movie I’ve watched in a long time, and I don’t think that’s only because it’s about me. It beautifully illustrates the power of friendship and imagination in the life of a child, and shows that these forms of escapism can be true saving graces during difficult times. I laughed. I cried. I relived my childhood. If you’ve ever been swept up in the romance of a movie and all the possibilities it opened in your life, you will too.

Son of Rambow is set in England during the early 80s, and chronicles the life-altering events that unfold after a little boy pirates a copy of First Blood from the local theater. Lee Carter (Will Poulter) does that sort of thing all the time, and usually with a cigarette casually dangling out of his mouth. He’s no stranger to the principal’s office, and he’s not above stuffing a few supplies down his shirt when he visits the store. His parents spend most of their time in Spain, so he and his older brother are left to their own devices as they rattle around the “care-room” (i.e. nursing home) their stepfather owns.

Little Will Proudfoot (Bill Milner) is Lee Carter’s polar opposite. He spends his days drawing elaborate cartoons and dwelling in his imagination, but as a member of the Plymouth Brethren, he is prevented from watching TV or movies, listening to the radio, or mingling with children outside of his sect. It’s a stifling life at times, and the sudden death of his father has only made things worse. His mother seems frazzled all the time, his tiny sister is of little use, and his poor old grandmother is forever wobbling around or tipping over. Even more alarming, Brother Joshua (Neil Dudgeon) is trying to worm his way into their mother’s heart and act as a father figure. Mostly he acts as a big fly in the ointment.

Both Lee Carter and Will Proudfoot are quietly struggling with loneliness and sadness when they cross paths, but on the surface, the two have little in common. Lee Carter is streetwise and tough, while poor Will is spindly and innocent. Their bond isn’t cemented until Will catches a glimpse of Lee’s pirated copy of First Blood. This is undoubtedly the first time he’s seen a movie of any kind, and his imagination immediately takes flight. He’s sucked in by the idea of one man facing off against the forces of evil with only his strength, wit, and Colonel Trautman to protect him, and suddenly he can do anything. He runs from Lee Carter’s house as though his feet are on fire. Why? Because he’s not just Will Proudfoot any more – he’s the Son of Rambo! Rescue his father from the clutches of the evil scarecrow? Done! Empowered and inspired, Will tackles life with new zest, and this leads him right back to Lee Carter.

The two boys combine forces to create a short film for a television contest. With Lee’s camera equipment and Will’s imagination, Son of Rambow is soon in production. As the title character, Will gamely engages in all manner of stunts, always scraping himself up and carrying on as though nothing hurts. The boys are of the age when falling out of a tree, catapulting into a wall, or swinging from a rope into a swamp sounds like a brilliant idea. Any resulting bodily injury comes as a complete surprise. Ah yes, I remember those days well. It was always, “Hey, look at me!” followed by, “Oh my god, I think I’m dead. Don’t tell my mom.”

The movie itself soon takes on a life of its own and elicits the interest of one of the coolest and most mysterious boys in school. While Will delights in the realization of his vision, Lee begins to feel a little left out. As their project nears completion, the boys begin to reach a breaking point, both in their friendship and in their personal lives. Though they will both hit bottom before things change for the better, it is their friendship and the experience of making their movie that ultimately saves them. Without First Blood as their inspiration, and without their shared vision to bind them, they might have gone on being lonely and sad forever. Brilliantly, the relationship between the boys often mirrors the one between Rambo and Trautman in First Blood.

With its careful blend of humor and sincerity, Son of Rambow is as funny as it is touching. The New Wave soundtrack makes you feel as though you’re back in time, and then, of course, there’s Rambo. First Blood certainly made an impression when I saw it as a kid, and while I just wanted to take care of Rambo (maybe make him cookies, find him a warmer shirt, and fix him up with some stitches), I can see why little boys would have wanted to be Rambo. Not everyone understands the magic of watching a movie and then launching into hours of inspired, imitative play, but writer/director Garth Jennings captures that aspect of childhood perfectly.

Extra features include the Rambo-inspired home movie made by Garth Jennings at age fourteen, and a weighty “Making Of” segment. The adorable stars of the movie have become good friends in real life, and watching them in the interview segment is every bit as entertaining as the movie itself.