Iron Man is back, this time with better villains, better writers, and yes, lots of explosions. Fans, rejoice!
By Lindaon May 1, 2013
0 Comments
Our Rating 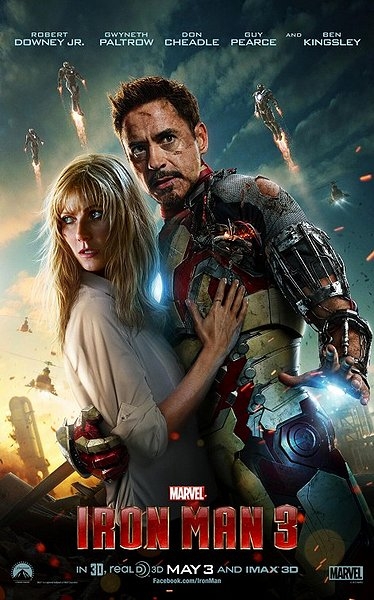 Iron Man, aka Tony Stark (Robert Downey, Jr.), seems to be suffering from a bit of PTSD. He has nightmares, colds sweats, panic attacks, and obsessively is working on creating a whole new army of iron men in his rich-man basement. It’s all about what happened in New York, apparently. (“WHAT happened in New York?” I leaned over and asked my friend. “You have to see The Avengers!” was the answer. Oh. OK.) His lady Pepper Potts (Gwyneth Paltrow) is apparently holding down the fort of his business in the meantime, while he tries to get his shit together. (The first half hour of the movie kind of lumbered along, in my opinion…)

BUT! There has to be a bad guy to get Iron Man bursting sky-high through the ceiling of his cocoon, yes? Enter The Mandarin (Ben Kingsley). The Mandarin appears in recorded messages, interrupting your local programming. He is the American Nightmare: He looks “ethnic” with his brown skin. He has a scary Taliban-like beard. He likes swords as symbols. And he seems to record his threatening messages from a burnt-out dusty bunker. Oh, and he has a weird American accent that makes him sound like Johnny Cash with a mouth full of marbles. Bombing attacks have been occurring around the U.S., killing innocent people, and The Mandarin claims responsibility.

Tony Stark does not like this. But Tony Stark gets really mad when his buddy Happy (Jon Favreau) is gravely injured in an admittedly horrific explosion at Hollywood’s famed Chinese Theatre (it is hard not to shudder how the scene looks similar to the Boston Marathon bombing). Tony Stark vows to find and kill The Mandarin.

Now that all sounds serious and scary, and some of it kind of is, but as we all know, Iron Man is all about comic relief. Tony Stark continues to be a non-apologetic smart-ass, especially with his interplay with a kid he meets on his journey. This kid (Ty Simpkins) is waayyyy to cute for his own good, which looked like trouble, but ended up having some of the funniest scenes of the film with his interplay with the decidedly non-cutesy Tony.

Among the other new characters thrown into the mix are the buck-toothed-nerd-turned-hot-scientist Aldrich Killian (Guy Pearce), and another smarty pants woman from Tony’s past, Maya Hansen (Rebecca Hall), who is a biologist that has figured out how to make plants regenerate. The bad guys in Iron Man 3 are better than the last time around (I furrowed my brow trying to conjure up Iron Man 2, and all I could say was, “That guy with the whips…”), and the writing is notably better: crisper and funnier. The expected showdown at the end offers lots of explosions, as well as some food for thought for Iron Man’s future. This third installment will please fans that loved the first, and is definitely a fun popcorn night at the movies.