The downright weird dialogue blatantly filling a children’s TV special is just one of the reasons why so many of these Peanuts specials remain classics. 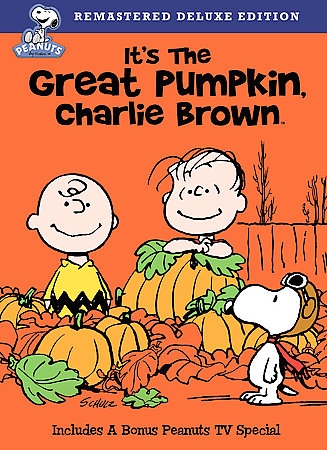 Less than two weeks ago, I read with sadness that Bill Melendez died at the age of 91. Admittedly, the name didn’t spark instant recognition—but then I read his bio. Melendez, along with his producing partner Lee Mendelson, was best known as one of the main creators of the Peanuts TV specials, and (wait for it…) did the voice of Snoopy. “Waaaaaah!” (I howled in my best imitation of sad Snoopy.)

Among all of their Peanuts specials, It’s the Great Pumpkin, Charlie Brown is probably second only to A Charlie Brown Christmas when it comes to the best of over 50 (!!!) Charlie Brown specials that the team produced. And many of the best-known (packaged with some of the more obscure) are now being re-released as “Master Deluxe Editions” by Warner Bros.

In case you haven’t seen The Great Pumpkin a millions times like almost everyone who was born after 1960, here’s the rough plot for the half-hour special. The kids are all in a tizzy, excited about “tricks or treats”, making costumes, carving pumpkins (in one case using poor Charlie Brown’s inexplicably ever-bald head as a practice template for designs), and creating costumes. In the meantime, Linus, blanket in tow, is sitting in the pumpkin patch, along with love-struck Sally, waiting for the Great Pumpkin. He explains the Great Pumpkin like this:

“Each year the Great Pumpkin rises out of the pumpkin patch that he thinks is the most sincere. He’s got to pick this one! I don’t see how a pumpkin patch could be more sincere than this one. You look all around and there’s not a sign of hypocrisy! Nothing but sincerity reaching out as far as the eye can see.”

You’d think that I’d be making up that dialogue, but I’m not. The downright weird dialogue blatantly filling a children’s TV special is just one of the reasons why so many of these Peanuts specials remain classics. As I re-watch these shows as an adult, I always cackle at the dialogue, like when Sally questioned the validity of trick-or-treating by saying, “I wouldn’t want to be accused of taking part in a rumble.” The other reason to watch is to feel better about yourself by sharing in the wretchedness that is poor Charlie Brown’s life. Try not to wince, even now, as the kids go through what treats they got dropped in their bags:

It’s enough to break your heart.

Each of these Warner Bros. re-releases comes with a bonus episode or two of the more obscure Charlie Brown specials. In this case, it is “It’s Magic, Charlie Brown” from 1981, a special that I literally never heard of. Charlie Brown tells Snoopy to get an education, so loans him his library card (which made me smile). Snoopy picks up a book on magic, and performs for the heckling neighbor kids. His crown trick is making Charlie Brown disappear, but then the show is interrupted by a rainstorm, and Charlie Brown spends the rest of the episode invisible. An odd episode.

The best part about the disc though is the sweet featurette “We Need a Blockbuster, Charlie Brown”, which features interviews with Melendez (adorable with his bushy white moustache) and Mendelson, as well as Charles “Sparky” Schultz’s son and wife, as they reminisce about the making of Great Pumpkin.