This movie does exactly what it is supposed to do: It puts a big ol’ smile on your face through the joy of music.
By Lindaon December 5, 2012
0 Comments
Our Rating 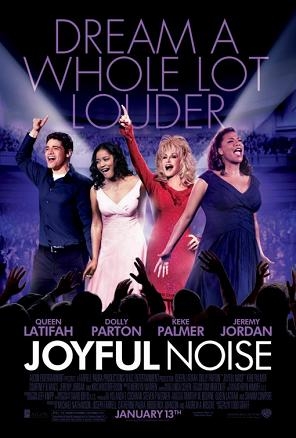 I’m sure highbrow critics will give this film withering reviews simply because it is such a blatant crowd-pleaser. With song, dance, corn pone one-liners, a bit of romance, a bit of sadness, and more than a little bit of “Little Engine That Could” gumption, and you have a movie where the audience actually burst into applause at the triumphant finale. Sure, I’m sure there were some sour-faced, eyeball-rolling naysayers present, but heck, they aren’t the target audience for something as feel-goody as Joyful Noise.

The small town of Pacashau, Georgia just needs a little glimmer of hope. Men are leaving town to find jobs, women are holding down multiple low-paying jobs to make ends meet. Then you have the Divinity Church Choir who have been trying to make to the finals of the National Joyful Noise Competition, but can’t seem to get past regionals. When the choir director Bernie (Kris Kristofferson) keels over in the opening credits, looks like the position is open, and church benefactor G.G. (Dolly Parton) is sure the job is hers, but the pastor gives the job to Vi Rose (Queen Latifah). Claws are quite literally out (Dolly sure has some talons!) as the two women fight over the spirit and the tone of the choir, trying to find the magic that will take them to Nationals and give the town a much-needed lift in pride.

Queen Latifah and Dolly Parton are two enormously appealing entertainers, and it is especially fun to see Dolly quipping her one-liners on screen again (even when she mocks her own plastic surgery). They are surrounded by an exceptionally—and refreshingly—diverse cast of supporting characters, including, yes, ASIAN Americans that have American accents (I always take note of this). A bit more attention is spent on the requisite young love story between Vi Rose’s 16-year-old good-girl daughter Olivia (Keke Palmer) and the G.G.’s bad-boy grandson Randy (Jeremy Jordan) who has been sent by his mother from New York due to some vague trouble that is never explained. Oh, well. Their romance is cute, and the boy gets points for his friendship with Vi Rose’s Asperger’s-afflicted song Walter (Dexter Darden).

OK, I know, I know… It’s one of those movies where all is set right with the power of song. But is there really anything wrong with that? This movie made me smile. It made me laugh. Shoot, it even make me cry. Both Queen Latifah and Dolly get nice solo numbers, but Dolly’s rendition of “From Here to the Moon and Back” (sung to the memory of her husband), which was *this* close to being corny, totally got me weepy. You know what? There is absolutely nothing wrong with a feel-good movie, and Joyful Noise totally worked for me.

Of course I loved the extras! There is a spotlight on Dolly Parton’s “From Here to the Moon”, a song that Dolly says she wrote for her husband, and the featurette has interviews and behind the scenes footage of Dolly recording the song. Apparently Dolly whipped up 12 songs for the three slots she was asked to fill in the film! “Leading Ladies” also goes into the recording studio with Dolly and Queen Latifah. In “Inspiration of Joyful Noise”, director Todd Graff describes how the story of the film was an homage to his mom and the church choirs (his mom was the Vi Rose character). There are some extended songs, deleted scenes, and finally a live show where Queen Latifah and Dolly Parton take the stage together to sing “He’s Everything”. 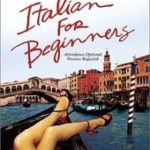