Jumanji: Welcome to the Jungle

Admittedly, walking into the screening for Jumanji: Welcome to the Jungle, my hopes were high but my expectations were low. When the reboot of the classic 1990s adventure film had initially been announced, I scoffed. “A remake? Only 20-ish years after the original? Pshaw!” Nevermind that I didn’t recall anyone clamoring for more Jumanji back in 1995. But the reboot’s trailers gradually won me over, and – as someone who already loves The Rock – I was looking forward to seeing what new spin they’d put on the adventure classic… but I feared I was about to sit through two hours of unfun.

Much to my relief and delight, J:WttJ is a fun, energetic action-comedy buoyed by a talented cast, who fully embrace the fact that they’re in a movie about being stuck inside a video game, with a very obvious – and effective – nod to the John Hughes classic, The Breakfast Club. 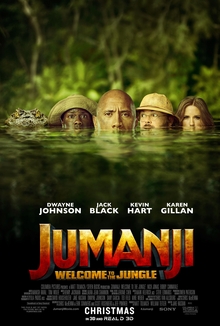 As the movie opens, it’s 1996 and the nefarious, centuries-old board game has turned itself (yes, turned itself!) into an Atari-like video game so as to keep up with the times and lure a new generation of unsuspecting kids into playing. Much like the original, an unsuspecting player starts the game and promptly gets sucked in – literally – never to be heard from again.

Cut to present day, and four high-school misfits – geeky Spencer (Alex Wolff), jock Fridge (Ser’Darius Blain), self-absorbed Bethany (Madison Iseman) and introverted Martha (Morgan Turner) – find themselves stuck in detention together. When they stumble upon the now-relic-worthy 1996 game console with the Jumanji cartridge still loaded, they hook it up, turn it on, select their avatars and *poof!* are pulled into the game.

Thing is, they land in Jumanji as their avatars: Spencer is now the hulking Dr. Smoulder Bravestone (Dwayne “The Rock” Johnson); Fridge is zoologist Moose Finbar (Kevin Hart); Bethany, much to her profound horror, has become middle-aged cartographer Dr. Sheldon Oberon (Jack Black); and Martha has morphed into ass-kicker Ruby Roundhouse (Karen Gillan). Their mission is to retrieve a giant emerald and return it to its rightful place inside the eye socket of a humungous rock formation shaped like a jaguar. Accomplishing that will “win” the game and return them to the real world. But once again attempting to thwart the players at every turn is the evil Van Pelt (Bobby Cannavale), who – in this incarnation – is a lot less “rigid 19th century hunter” and a lot more “swarthy supernatural supervillain.”

Our heroes stumble upon an ally in Jefferson McDonough (Nick Jonas), a pilot and fellow avatar who’s pretty quickly revealed to be the hapless missing teen from 1996, who (like Robin Williams in the first film) has been stuck in the game, waiting for someone to finish what he started decades earlier.

Almost from the get-go, madcap video-game hijinks ensue, as the newly arrived quartet adjust to their new bodies and new skills (“how do I know this?!”), brave endless obstacles, flee assorted foes and gradually learn some lessons about life, acceptance and each other.

And it’s a whole lot of silly fun.

Kudos go to the cast, especially where the body-swapping angle comes in. Adult actors making themselves believable as teens is one thing, but being believable and creating memorable characters in the process (especially in a movie that could easily have defaulted to throwaway caricatures) is impressive. Johnson, Hart, Black and Gillan are all great as teens trapped in completely foreign bodies, but Black edges everyone out to earn the film’s MVP trophy for his brilliantly nuanced version of an image-obsessed girl trying to deal with, well, being a middle-aged man. His Bethany is revealed to be less vapid than she seems, and more insecure than she lets on, and Black deftly plays her for laughs and heart.

Johnson and Hart rekindle their Central Intelligence yin-and-yang comic partnership, and it once again works well here, and Gillan – easily the least-known among the cast – holds her own just fine. Jonas and Cannavale are okay, but neither’s character is as well-rounded or solid as the core four.

As far as the story goes, this is a movie anchored in video-game action, so you definitely shouldn’t expect King Lear. It’s light and breezy and easy to follow, with fight scenes, epic chases and several very colorful, imaginative deaths – with constant reminders that each of the characters has only three lives in Jumanji. But, as mentioned, it’s also infused with some nice messages about being who you are instead of hiding behind a mask. And I will openly admit that, as with the original, I found myself getting teary at the end.

Geared towards kids and adults alike, the film isn’t for anyone looking for something deep and meaningful and Oscar bait-y. But it’s definitely a family-friendly option for anyone looking to take in a shamelessly fun big-screen adventure this holiday season. 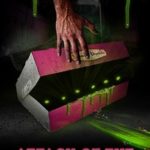 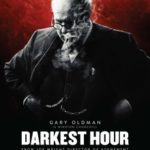