Attack of the Killer Donuts

If Tommy Wiseau were into mad scientists and gross-out humor instead of nonsensical tragedy, he easily could have made Attack of the Killer Donuts instead of The Room. The title makes no secret of the movie’s campy nature, but it’s amateurish execution puts it in a league of its own. 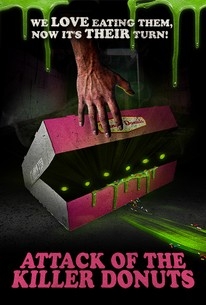 As someone who kind of loved 80s B-movie gems The Blob, The Stuff, and even lesser fare like Slugs, I approached Attack of the Killer Donuts with an open mind. The viewing experience was on par with an episode of Mystery Science Theater without the jokes.

Johnny Wentworth (Justin Ray) lives with his mom and works at Dandy Donuts chiefly so that he can give money to his shallow “girlfriend”. Childhood friend Michelle (Kayla Compton) works there as well, and Johnny’s mom really wishes the two of them would get together. Michelle, after all, is such a nice girl.

It’s true that Michelle is a nice girl, a good friend, and the least terrible performer in this movie, but there are more pressing matters at hand. Johnny’s uncle is some sort of mad scientist and after getting into an actual brawl with the owner of Dandy Donuts (like you do), he drops some of the chemical compound used in his last experiment. Naturally it falls into the fryer and soon Johnny and Michelle are whipping up killer donuts by the dozen.

Inexplicably, the donuts will either bite you to death with their idiot teeth, or you can just eat them normally and they will deliver a crushing case of tummy trouble. This means noxious neon green farts, huge floods of green…diarrhea?…and lots and lots of vom. Whee! Are you laughing yet? Cause this horror is hilarious.

C. Thomas Howell (oddly billed as C. Tommy Howell) offers the film’s only star power as an obnoxious, farty cop named Officer Rogers. He and his partner, Officer Hammerstein (see what they did there?!) are early victims of the donuts’ wrath, and their extreme ineptitude paves the way for Michelle, Johnny, and their random friend Howard to save the day. In the process, they confirm that Johnny’s girlfriend is really a skank and Johnny and Michelle officially fall in love. ROMANCE!!

Somehow even this unflattering description of Attack of the Killer Donuts doesn’t convey how bad this movie is. It’s disjointed and cynical, cartoonish and immature. There are various quotes and references to beloved movies (The Breakfast Club, Ferris Bueller’s Day Off, The Karate Kid, Wayne’s World, and Home Alone to name a few), but everything lands with a heavy handed thud. It’s impossible to invest in the characters or their troubling battle with the killer donuts and, in turn, it becomes impossible to overlook the film’s technical flaws.